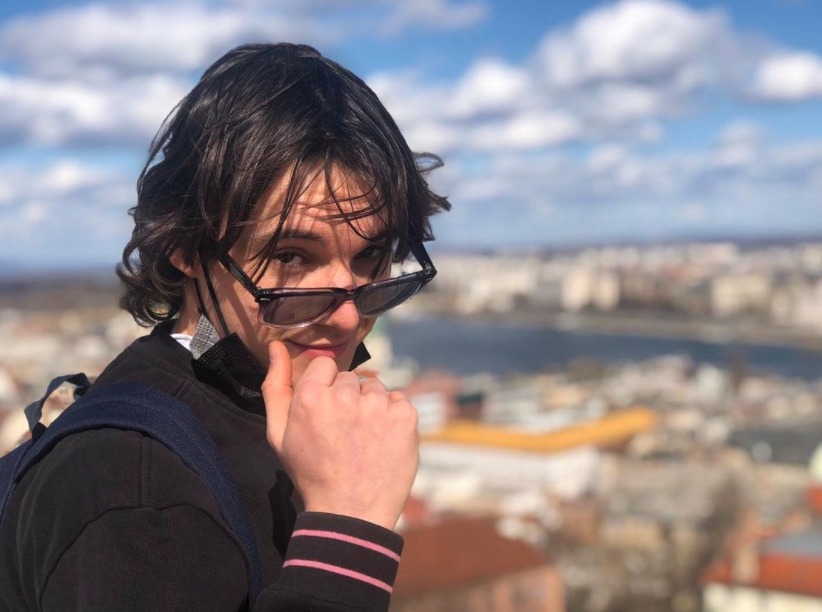 Ewan Horrocks is a British actor whose first acting experiences have made him a favorite among the lovers of historical fiction and epic stories. He describes himself as an ever thankful person and exudes those cool vibes only a thoughtful person capable of making fun of themselves can project.

Since he got to be part of the latest season of The Last Kingdom, we talked about this Netflix acclaimed TV show, his role in the historical drama Domina, his life, and the wonders of acting. So, let us get to know him better in this interview for Vanity Teen.

VT: What would you like to tell us about yourself?

EH: I’m 20 years old, and I was born and raised in Halifax, West Yorkshire, with my parents and my little sister. I used to work as a lifeguard at my local swimming pool. Fortunately, I’ve never had to jump in and save anyone!

VT: Which songs and books are like your safe place nowadays?

EH: I think it really depends on what I’m feeling at that moment. My music varies, and I can listen to anything from Johnny Cash to Kendrick Lamar to Arctic Monkeys. I also love film scores. I have a playlist on Spotify specifically filled with songs to boost my creativity, and when I read, I love listening to instrumental music.

VT: How did you get into the acting world?

EH: From an early age, I fell in love with acting, whether that was making short films with my family or performing on stage; I knew I wanted to pursue this as a career. So, when I was 16, I joined the National Youth Theatre and an acting school in Manchester, where I was picked up by an agent. Since then, I’ve been fortunate enough to continue working, and I’m ever thankful for having such supportive people around me.

VT: Who are your biggest inspirations in life?

EH: First and foremost, it has to be my parents. They have worked incredibly hard in their work and personal lives to provide for my sister and me, allowing us the freedom to follow our passions and turn them from hobbies into careers.

As a kid, I fell in love with the characters like Jack Sparrow, Luke Skywalker, and James Bond. I loved the thrill of the adventures! But as I’ve got older, there are so many different actors I idolize, from DiCaprio to De Niro and many others.

VT: How has it been to you being part of the Roman Empire in Domina?

EH: Well, to play a figure in history for my first role was incredibly daunting, but having a supportive team enabled me to take Drusus off the page and make him a real person once again.

VT: You are also part of the latest season of The Last Kingdom. What can you share with us about your role on the show?

EH: I play a figure in Saxon history called Ælfweard. In the series, he is a young man who has been raised and promised, by his grandfather, to become the next king. He is a gentle, caring, and sheltered soul who doesn’t understand the cruelty of the outside world, so when a series of tragic events occur, he is left lost and must choose a side to secure his destiny.

I also had a bowl cut very similar to the Beatles, which was great for the time period but wasn’t the best look for my everyday life!

There’s always more we can do

EH: I continue to train at my acting school, as the industry is constantly evolving, so it keeps me sharp and focused. But for a long-term goal, I guess I’d just love to keep working and pushing myself in different roles and projects. That’s the dream.

VT: How has acting helped you in life?

EH:  I think it’s really allowed me to understand more about myself.

I think it’s a great tool to delve into the complexity of people.

It also helped me recognize how precious time is. Being away for six months at a time really opened my eyes to who is important in my life and how much I cherish those around me.

VT: What do you think young people could do to make the world a better place?

EH: I think that we to appreciate and support one another and be more aware of the planet on which we all live.

We are all surrounded by so much information, whether that be current world issues, climate change, poverty, mental health, and well-being. There’s always more we can do; we just have to find ways to be active.

EH: Thank you very much for interviewing me. I can’t wait to see what the future holds.

Ewan Horrocks may have been part of epic tales portrayed on TV; however, he invites us to be part of our very own heroic stories in everyday life: making the world a kinder place for everyone by looking for all the possible ways to stay active and do our part.

If you want to know more about him and his upcoming projects, you can follow him on social media @ewanhorrocks.

In this article:Ewan Horrocks, exclusive