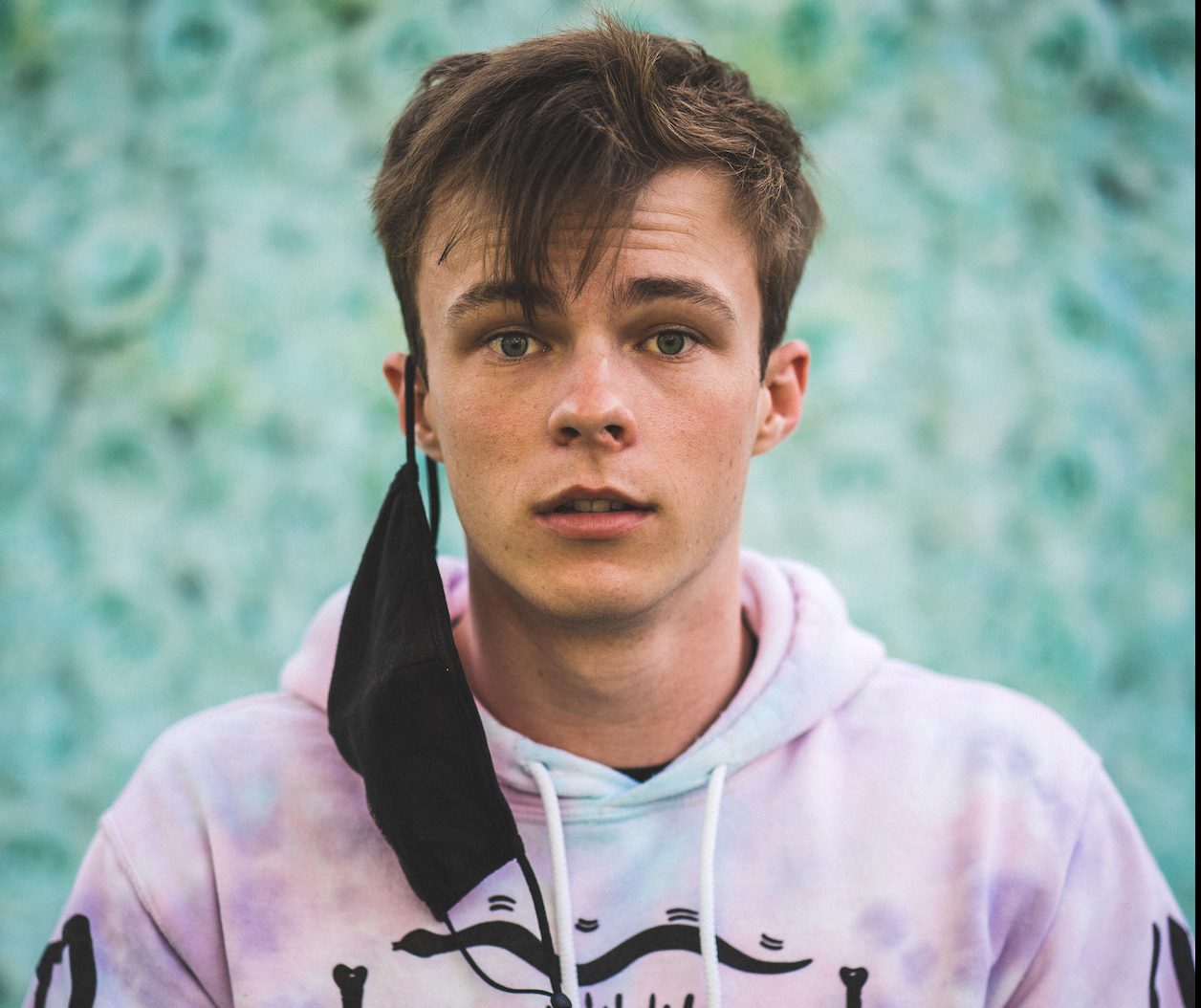 Nicholas Hamilton, the young Australian actor we love for his talent, kind messages, and openness, has been quite active lately with new projects like Pretty Young, his 5-song EP, and filming the thrilling Snapchat series Action Royale. Nevertheless, we had the opportunity to have a conversation to talk about his life and career in this exclusive interview for Vanity Teen.

One of his most famous roles is the obnoxious Henry Bowers in the widely acclaimed IT films. But unlike that character, this artist is a great defender of plurality and always advocates for those who face harsh times for being different. Therefore, we invite you to keep reading this article and see how Nicholas Hamilton is nothing but a kindhearted person who loves to share his passions with the world in every one of his projects.

I love my job

VT: What do you cherish the most about being an actor?

NH: I love my job. I haven’t found another experience that gives me the same feeling as being on set does. Nothing is quite like the vibe of being around people who all have the same predetermined goal and the same drive to achieve it. The bonds and friendships I’ve made with people who I’ve met while filming are some of my closest connections.

The locations too. Being able to travel to places I would’ve never visited otherwise and get paid to do it is a pretty good gig. I’m currently in rural Pennsylvania, and I’ve had nothing but fun since I got here.

VT: When filming or traveling for work, what do you miss the most about your hometown?

NH: It depends on what you consider my hometown.

I grew up in Australia, but I moved to LA 3 years ago, and I still love it. I miss LA every time I leave to go on location. I had the opportunity to go back to Australia in Q2 of this year for a few months before starting on this Pennsylvania job. It was a nice reset, mentally.

VT: You have been part of the cinematic universe of Stephen King. How have those experiences been? Which of those filming memories has been the most significant?

NH: I’ve been lucky enough to be in three Stephen King movies so far, in some capacities bigger than others. I auditioned for the lead role in The Dark Tower and got down to the final two but missed out. The Producers very generously offered me a much smaller role which allowed me to go to South Africa for a week, only shooting for one short afternoon.

A few months later, I was cast as Henry Bowers in IT, which changed my life. That was such an incredible experience, too. Everyone on set just gelled and worked so well together. IT: Chapter Two was all that, multiplied by ten.

VT: In 2016, you were part of one of my favorite movies, the acclaimed Captain Fantastic. Back then, were you aware of the profound topics the movie portrays? When was the first time you saw the film, and how did you react?

NH: I’m sure I wasn’t aware. We shot that movie 7 years ago, when I was 14, so I really don’t remember much about the shoot.

I remember seeing it for the first time at 15, and really enjoying it; but even then, I’m sure I didn’t grasp what the movie really means and how heartfelt it is.

The more I’ve learned over the years, the more I appreciate that movie.

Since it was so long ago too, I feel like I can say that it’s one of my favorite movies ever because it doesn’t feel like one of my movies. It’s so great.

VT: Action Royale, your latest project, is one of the most anticipated series of the current time. What can you tell us about it?

NH: I’m super excited about Action Royale! It’s fairly deep and emotional for a short-form young adult show, and it deals with fairly heavy topics like gambling addictions and how dangerous they can be, while staying fairly whimsical in its approach.

It’s on Snapchat, which I feel might scare some potential viewers, but it really does need to be given a chance, if even for the novelty of it being shot vertically to fit on your phone screen.

VT: Some months ago, you spoke out about getting COVID and invited people to get vaccinated. Do you consider that message as still relevant? Should young people be concerned about common health and safety?

NH: Absolutely. It’s more of a lesson of don’t do what I did. I was fairly careless in going out before my vaccine had the chance to fully kick in and got very sick because of it.

I had a fairly minor experience with my proper symptoms only lasting about 2-3 days, but that’s 100% because I was vaccinated.

It’s a point that’s been rammed home for months now, but getting vaccinated when you can is such an important step towards getting the world back to at least a semi-normal state. It’s anti-vaxxers and anti-maskers who are holding us back from getting there, and that point needs to get into people’s heads, especially young people.

VT: Let us talk about your music. Pretty Young is out now, and it seems to be a very personal reflection of your life and thoughts. Could you share more with us about this project?

NH: It is! When COVID shut down the film industry, for however long it, in a roundabout way, allowed me to have the time to focus more on the music that I’d been writing since mid-2018.

I worked on my voice every day, wrote more songs, tried to perfect the ones I’d already written, and got together with some incredible collaborators to put together a 5-song EP that really does encapsulate my life so far.

The title track, Pretty Young, is all about acknowledging that I know how young I still am while also reflecting on the younger me and how much I’ve changed in 21 years of life.

VT: Which struggles did you have while growing up that you have overcome and currently make you think that, indeed, things get better with time?

NH: I mean, the obvious “struggle” is my coming out, but truth be told: I had a fairly easy, privileged childhood, especially compared to others.

That goes for my coming out also. I struggled more with myself and my self-identity than anyone else’s view of me.

I was never brought up to think that being gay is “wrong”, it was more that, growing up in a small suburban town in majority Christian, conservative Australia, you more so just heard people using really ignorant terms. Saying something bad is “gay”, etc.

I 100% fell victim to saying things like this as a kid. When you don’t know any better, you say the things you hear.

Embarrassingly, that version of me carried over into my mid-late teens, well after I knew that I was gay myself. I got better and learned more after I properly came out to my family and friends at 18, but truthfully, my desire to move to LA right after I graduated high school was the thing that pushed me to fully become a better person.

I learned so much about myself and the people around me in those first few months after moving to LA. My first relationships and my close friends here really helped me become a person that I’m ultimately proud of.

VT: Bullying and insecurities are affecting the youth. You have depicted them in some of your acting projects. Therefore, what message would you like to share with all the young people who might be experiencing difficult times because of those issues?

NH: It’s been a point that I’ve wanted to make ever since IT 1 came out, that my character isn’t who I am, and that bullying obviously isn’t okay.

In the current world, insecurities can be exploited so much more easily, with social media, TikTok being a stand-out vehicle for the bullying of young people. The common messages are right, I think. To talk to an adult who can remedy the situation, turn the other cheek, all that.

I survived my school years by living by one motto, which I’ve carried through to now: Treat people with the respect you’re given. I think too many people get away with disrespecting others, specifically, adults towards younger people. It seems younger generations have learned how to fight back and use their voices for good against adults who are making their lives harder, but we still have a ways to go.

NH: Check all of me out! Action Royale comes out exclusively on Snapchat in October. My debut EP, Pretty Young, is out now on all music streaming platforms. And I’m on all the social media! Come chat.

In Pretty Young, Nicholas Hamilton sings about feeling that life has not stopped since we were kids, and despite we have changed, we are still young people with more to live ahead, young people who collect memories that become treasures we hope to keep forever. But no one knows the future, so we hope for the best.

I am almost sure this song is personal for him because, after this conversation, I realized his words show a type of kindness that is not what we develop as social beings but that kind we express after learning from our mistakes and move forward.

Nicholas Hamilton radiates a kindness that comes after understanding that the best thing we can do is embrace honesty listen to others, and respect every human.

Let us be reciprocated with his sympathy as we enjoy his music and stream Action Royale, but most importantly, let us be honest, stay safe, and let us spread kindness with every person.