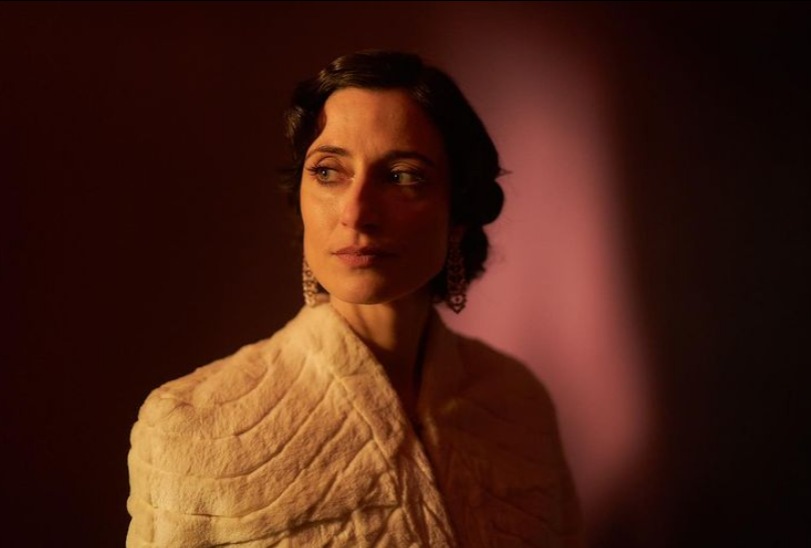 Natasha O’Keeffe has more than 20 credits as an actress in films and TV series, including hit British shows like Sherlock and C. B. Strike. Nevertheless, the whole world fell for her thanks to the Peaky Blinders journey in which she has been portraying Lizzie in this global phenomenon since the show began almost a decade ago.

As you know well, the sixth season is the last season of the series, and fans and critics have nothing but praise for the show. Therefore, we approached Natasha O’Keeffe to talk about the experience of being part of this instant classic, her life, and the values that motivate her to keep representing empowered women with her work.

I found out she is a great human being who speaks with wisdom and kindness, so I invite you to read this exclusive interview for Vanity Teen and get to know her better; you will love her more if that is even possible.

Curiosity is the reason I do this as a job

VT: How was your journey to becoming an actress?

NO’K: There was no one lightbulb moment that struck me to become an actress. It was a slow snowball effect, really. As there wasn’t anyone in my family that was from a theatre or film background to inform me that “sure yeah, this could be a career,” when I was little, I had a great interest in what some may say were more ‘mature’ film choices than I ought to understand for my years.

My dad would take me to the local picture house, and one outing that stuck out to me was Jim Jarmusch’s Coffee and Cigarettes. I also had this fascination with Jodie Foster in a film she did called Nell. Her performance was so different and nuanced. She plays this feral young woman that lives a hermit’s life and does not speak in a society-formed language of any kind, just her own. I was very young, absorbing all this, and felt an affinity for it.

There was also this film called Waiting for Godot that I was fascinated with! It was very still and abstract. These are just a couple of films from many that I could go into that may have started the snowball rolling. But we would need a long time to go into them all!

A family friend asked if I would be interested in auditioning for a play by a touring company when I was about aged 8, I got the part, and it was an eye-opener to see the rehearsal process and the behind stage.

I was very taken with how the actors would do their own make-up in their light-bulbed mirrors and warm-up on stage together before each performance.

I have remained just as curious, and the journey is still ongoing, thankfully!

I think curiosity is the reason I do this as a job. You can feed the curiosity by playing different parts and meeting such interesting people. I copied a best friend at school into applying for drama schools, as I had no idea what I was going to do, and low and behold, I got a couple of offers, one being the Royal Welsh College of Music & Drama. I felt a good vibe there and chose that one!

VT: As an alumnus of The Royal Welsh College of Music & Drama, do you encourage young people to perform formal education? Why?

NO’K: I wanted to drop out of school after my GCSEs, at the age of 16. I thought I would find a job in something fashion-related. It was all a bit of a vague idea, but I loved and still do love fashion.
I used to embellish all my clothes and was a charity shop bargain shopper, so I thought fashion might be a direction to take, but my mum had something to say about that! So, I completed my A-Levels, and, thanks to my mum, I needed these grades to get into the Royal Welsh College!

I don’t necessarily think you have to go to drama school to become great at acting. Sure, it is a place to make mistakes and gain some confidence in certain areas like voice and perhaps movement. It also allows you to showcase on your final year and hopefully pick up an agent! But I have to say, my personal take on it is that I have learned most things quickly in life outside of this and on the job!

I do feel passionate about the formative years of primary and secondary school and holding on in there even when you think it’s at its most boring sometimes.

I had a couple of topics where the teachers were everything. I had such an eccentric, fantastic English Literature teacher who acted all the Shakespeare and poetry out in front of the class, and it made it all more understandable and something I could connect to! I did well in those exams, purely because Mrs. Thomas held my attention!

VT: Since you are an English performer, how does it make you feel the great acceptance British productions have globally?

It is great to know that shows are getting seen outside of where you have filmed them and where it originates from.

VT: Now, let us focus on your work. You have been part of projects I love so much, just like Sherlock and C. B. Strike. So, how has been your experience with these TV shows?

NO’K: Sherlock being such a well-known and loved show, one that I also am a fan of, was fab to hop on board for that Christmas special: The Abominable Bride. Martin Freeman and Benedict (Cumberbatch) were open, warm, and fun to play opposite. The Strike team is just such a beautiful team of people, both cast and crew.

VT: How about Wheel of Time, since it has become an international success?

NO’K: Yes, I see that Wheel of Time has done impeccably well with the viewing ratings. No surprise there! But it’s hard to stand out in a fantasy-saturated climate.

There are so many fantasy series out there that I can’t keep up! So that’s great. The first series aired during the filming of the second series (which I am still on), so it was a confidence booster for all around that it has been so well received! I think the second series won’t disappoint.

VT: Probably, most people recognize you for portraying Lizzie Stark in Peaky Blinders, so what can you share with us about the new season?

NO’K: It’s been eventful being on the Peaky Blinders journey! It’s been just under a decade since the show began, so lots in both my real life and the story, the arc of Lizzie has developed and expanded over the years.

I was a baby-faced 25-year-old when I did my first scene with Cillian Murphy in that first series playing Lizzie Stark. It’s been an incredible opportunity to get to step back into Lizzie’s shoes year after year and each year to grow more and more. She is now known as Lizzie Shelby. I couldn’t have dreamt that from that first series. Steven Knight didn’t even know this is where this character would go!

VT: What would you like to tell us about Tyger and your future projects?

NO’K: Tyger is a low-budget independent film that my husband, Dylan Edwards, wrote alongside Alexander Milo Bischof (Alex Directed it).

I have been watching the film come together in post-production bit by bit, and I saw a semifinal cut the other day, which had me choked up in tears, and I am so proud of Dylan and Alex. The Director of Photography, Ariel Artur, has done such an amazing job. It’s so low budget, shot in 11 days, and looks like it should have been way more expensive to make.

It started in Margate in Kent, and they took it up to the Scottish Highlands. There were a lot of favors pulled in from friends who happen to be mega-talented like Laura Haddock, Ben Aldridge, Shaun Dooley, Gerald Kyd (who played my husband in Sherlock, who I shot in the head!), and Montserrat Lombard, to name but a few! Such stunning performances.

We have also got one of our best friends who happens to be a musical genius, Artur Dyjecinski, to score the film also. It was a moment for Dylan to showcase his versatility as an actor and explore some darker depths. It’s a stunning piece that I’m excited for people to see! I play the part of an ex-army colleague called Maggie.

Wheel of Time series 2 will probably not be out until 2023 sometime as the VFX and postproduction on a series of this scale takes so long! I can’t disclose who I play as I’ve been sworn to secrecy! But it’s been mega cool, nothing like I’ve done before, and I’ve got to work with some amazing people yet again.

VT: What do you do when you need to take a break?

NO’K: Cooking, spending time with family. A boogie and walks with my dog are my main downtime shenanigans.

VT: Which message would you share with those who find inspiration in your work?

NO’K:I can only hope to inspire! If I am an inspiration to anyone reading this, then thank you. I also think I need to voice how life is not a sprint. Keep it steady, and things will fall into place. I like to think the right things come at the right time. That is thus far, how my work has unfolded for me, even when I felt so impatient at times to get places in a hurry!

Natasha O’Keeffe invites us to be curious about life and the things that passionate us. That was how she found her passion for a long-term career that feeds the imagination of millions who have followed her work and feel like the lives of their characters were the lives of someone they know.

Finally, let me say that the world might go crazy sometimes, so let’s enjoy Peaky Blinders and the rest of her upcoming projects. But most importantly, I invite you to remember her words and use our curiosity to get out of the darker days that might come to us.