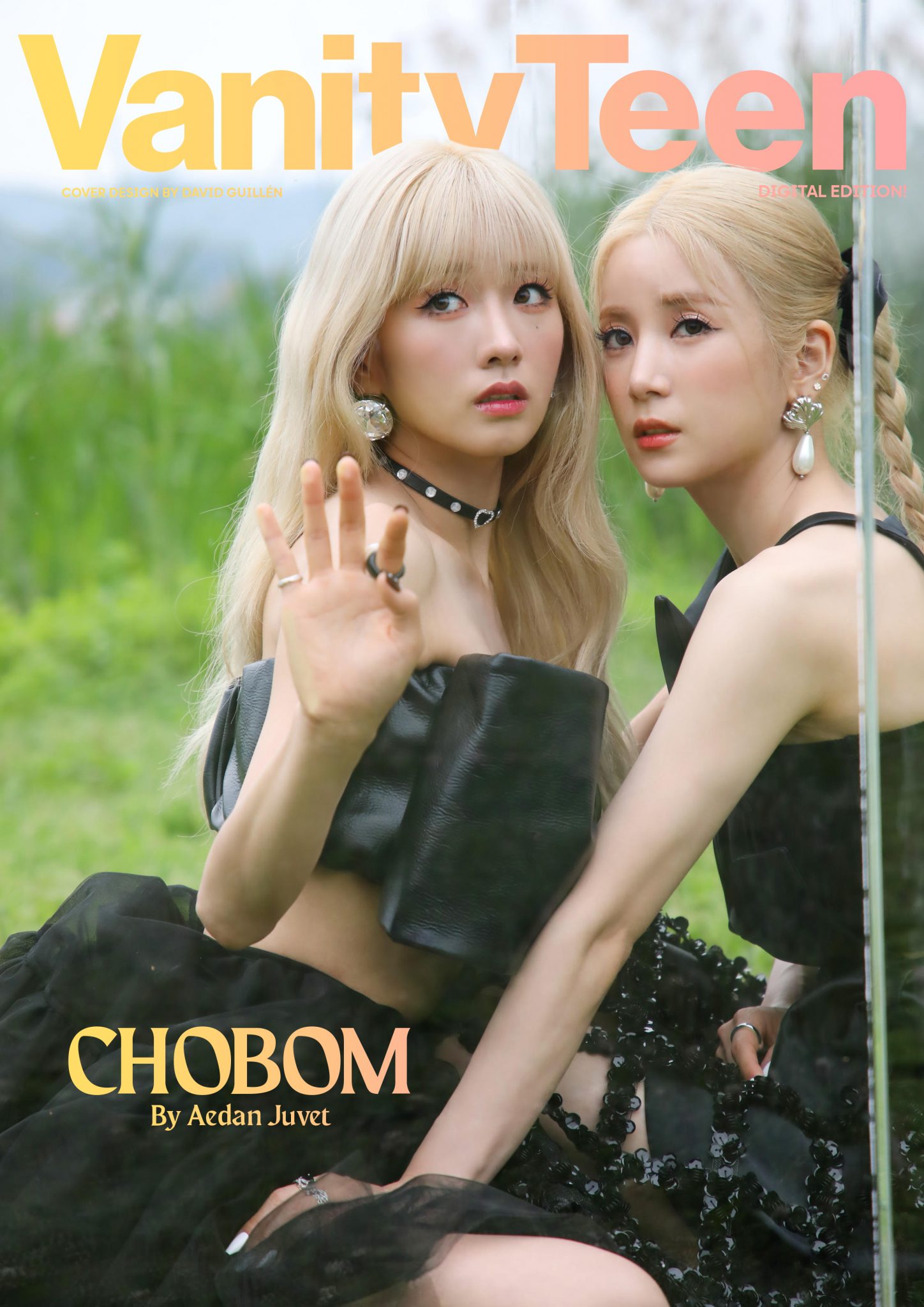 Generally speaking, there isn’t a long list of names in the music industry with the ability to surpass the 10-year mark… especially when it comes to ever-changing group dynamics. However, under the banner of the respected name Apink (@official.apink2011), the long-lasting charm of the legendary K-pop girl group has maintained an indispensable presence on a platform packed with fellow superstars. Now, after years of winning over a large, reliable global fandom and some of the most inconceivable domestic recognition fathomable, Apink’s next-gen endeavor comes from its two beloved members (Yoon Bomi and Park Chorong) taking on the eccentric combined name of CHOBOM. A totally influential, good-vibes bubblegum-pop duo that’s here to stay.

Individually, both women of the fresh-sounding Apink brainchild have already garnered rather extensive accomplishments, as Chorong is already known to be a multi-talented singer, actress, black belt, and of course, Apink’s fearless leader. Appropriately enough given the conceptual unity of CHOBOM, Bomi has experienced similar successes as a black belt, singer-songwriter, and actress, making their charismatic link-up an overdue K-pop masterpiece. Though even with distinct similarities, this duo enhances each other’s craft instead of strictly blending their talents.

With the sub-unit’s debut album [Copycat], CHOBOM perfectly emulates Apink-level perfection, but properly journeys into a more universal pop world that has potential for longevity. The unit’s title track “Copycat” is the first official song to impress, giving listeners a gratifying funky retro gem with impeccable unison, but when diving into the second track “Oscar” the pair ups the ante with a spellbinding and electric pop music experiment. Closing out the three-track mini-album is “Feel Something” which is the exact powerhouse inspirational ballad-ish moment you’d expect given its location in the album with an irresistibly synthy instrumental bridge to switch up the pacing.

While three tracks are just enough to appease our appetite for unrivaled pop greatness – the versatile offering of this harmonious partnership is simply just too good to become a one-album project. Fortunately, the duo is opening up to Vanity Teen as our new digital cover stars about the future of CHOBOM, their interpersonal compatibility, ideal fashion, and more!

You’ve officially been in the industry for over a decade under the Apink title which has garnered great praise and respect over the years! What were some of your early expectations and concerns when it came to choosing this path?

Park Chorong: To be honest, I think I was more worried than any other possible [expectations] at first. I was really worried about whether I could do well as a leader, if I could digest the stage well, and if I could do well without falling behind among the other members. I am naturally a very worried person… I think I was the kind of person who made it a little difficult for myself.

Yoon Bomi: Everything felt new and I think the learning process was fun! There were times when I was worried and thought, ‘I want to have fun, but I’m worried that I have to do well while promoting, so I’m just nervous and can’t enjoy this?’

What would you say is something you each credit to your long-term success in music?

Park Chorong: I think that walking well with Apink’s own style was the reason why it [the group] was able to receive so much love. We thought a lot about what suits us well, and what we should do naturally at our age, and we talked to each other a lot. And the chemistry between the members was always really good, and there are still a lot of concessions to each other. But I think treating the members well is the biggest reason we have been able to stay together for a long time.

Yoon Bomi: I think it’s communication! I want to show the team of Apink well, so I tend to talk a lot with the members and focus a lot on gathering opinions! I think the power of communication was also well expressed through musical achievements! There is a lot of learning going on from the ideas of the members and the company!

The Horn album really amplified Apink’s presence in this new era of K-pop which has been really inspiring to witness! How far would you say the group has come in terms of having a recognizable sound?

Park Chorong: Rather than coming to a certain point as a group, I think our album [Horn] was both a great challenge and transformation for us as well. For the past 10 years, we have tried to show a slightly different image within the colors we have, but now we think it would be great if we could show our musical colors and skills that we have cultivated over the past 10 years – so I took it on as a bold challenge. As Apink, we seemed to flow very naturally. Through this album, I wanted to hear stories from people like, ‘Apink can digest this style of song well too’ and, ‘It looks like Apink!’

Over the years, your digital song sales have genuinely triumphed, with multiple tracks surpassing the million mark. What song would you say has had the biggest impact on your own lives thus far?

Yoon Bomi: Actually, every song is precious to us! But, If I had to pick one, it was also “NoNoNo”, a song that made Apink known to the public a lot! It’s because it’s a song that gives people strength, and it’s a concept song that could best show Apink’s color! It’s a song that received a lot of love!

This brand new sub-unit you’ve created together titled CHOBOM is a refreshing opportunity for you too because there aren’t any particular expectations people have – and that means you can further develop your own sounds. Why would you say that you two feel like the perfect sub-unit duo?

Yoon Bomi: As a member who has been with the group for more than 10 years, I think teamwork is the most important thing in a team! So I was so confident about our teamwork! And it seems that there were always a lot of similarities with my sister Chorong. She loved dancing and singing, so we dreamed of being a ‘singer’ together, and from the beginning of her debut, she also heard a lot about us being twins. So this is a moment I’ve been thinking about for a long time. I even often thought, ‘’It would be great if Chorong unnie sings with me. She sings the same songs that I would want to sing. We are one!’

How different would you say CHOBOM feels from Apink, and what about it probably remains the most intact compared to the group’s usual style?

Park Chorong: Apink is a team with a variety of charms, from bright, cute, vague, and charismatic. But I think early spring is bright and has a sometimes strange feeling. The feeling I wanted was not too bright, but not too heavy either. It’s a difficult concept to put into words, but I wanted to make music that had a strange charm. And if Chorong and Bomi in Apink showed different charms, early spring seems to be the same, but there are slightly different charms in it, so I think it would be good if you enjoyed watching that part.

It has a great balance! How would you each introduce the general concept of CHOBOM to the world, and what prominent hopes were attached to this upon conception?

Yoon Bomi: As the name of the album says, it’s [Copycat]! The dictionary meaning is that a kitten imitates a mother cat, and it reminded me of a cute image that resembles a loved one! It was like Chorong unnie and I, who met different friends and started to resemble each other little by little! So we both came up with the concept of twins under the theme of being ‘one’!

This era also includes a fun shared style with some really striking and fun fashion moments too! What would you say excites you most when it comes to fashion?

Yoon Bomi: Wearing clothes that are as comfortable as possible on stage! [Chorong] is also the member who is least interested in clothes. But when I’m thinking about styling myself on stage, I look over it all day! In order to find the ‘uniqueness’ that no one else has done – I tend to draw pictures of myself and try different things out a lot.

Now that CHOBOM has been set free into the world, there’s certainly going to be a desire from fans for a return one day! Do you think we will see the return of CHOBOM, and what kind of sound could it entail?

Park Chorong: Oh, if this album goes well… [laughs] It’s a joke! Of course, we don’t want to end up with a one-off album! There are still so many things I want to do… I really cut it down this time too! Along with the Apink album, I want to release an album in early spring as well!

Oh, It’s a must! Finally, thank you so much for being our new Vanity Teen digital cover stars, and for sharing your first joint cover story with us! Do you have any final thoughts for our readers and longtime fans?

Park Chorong: Vanity Teen readers, it’s so nice to greet you with this new look! For the fans who are waiting for our album, we will always think hard and prepare a new look and new album! Please always watch and support us! Early spring’s first album [Copycat] Please give us a lot of love! thank you!

Yoon Bomi: We ask for your interest and love for the hard-prepared first single album [Copycat] in early spring! There were a lot of times we couldn’t see each other often due to COVID-19 and there were some difficult times, but as we slowly overcame it, we left a lot of good memories with this activity! Love it!

Check out the music video for “Copycat” below, and make sure to stream the duo’s mini-album here!