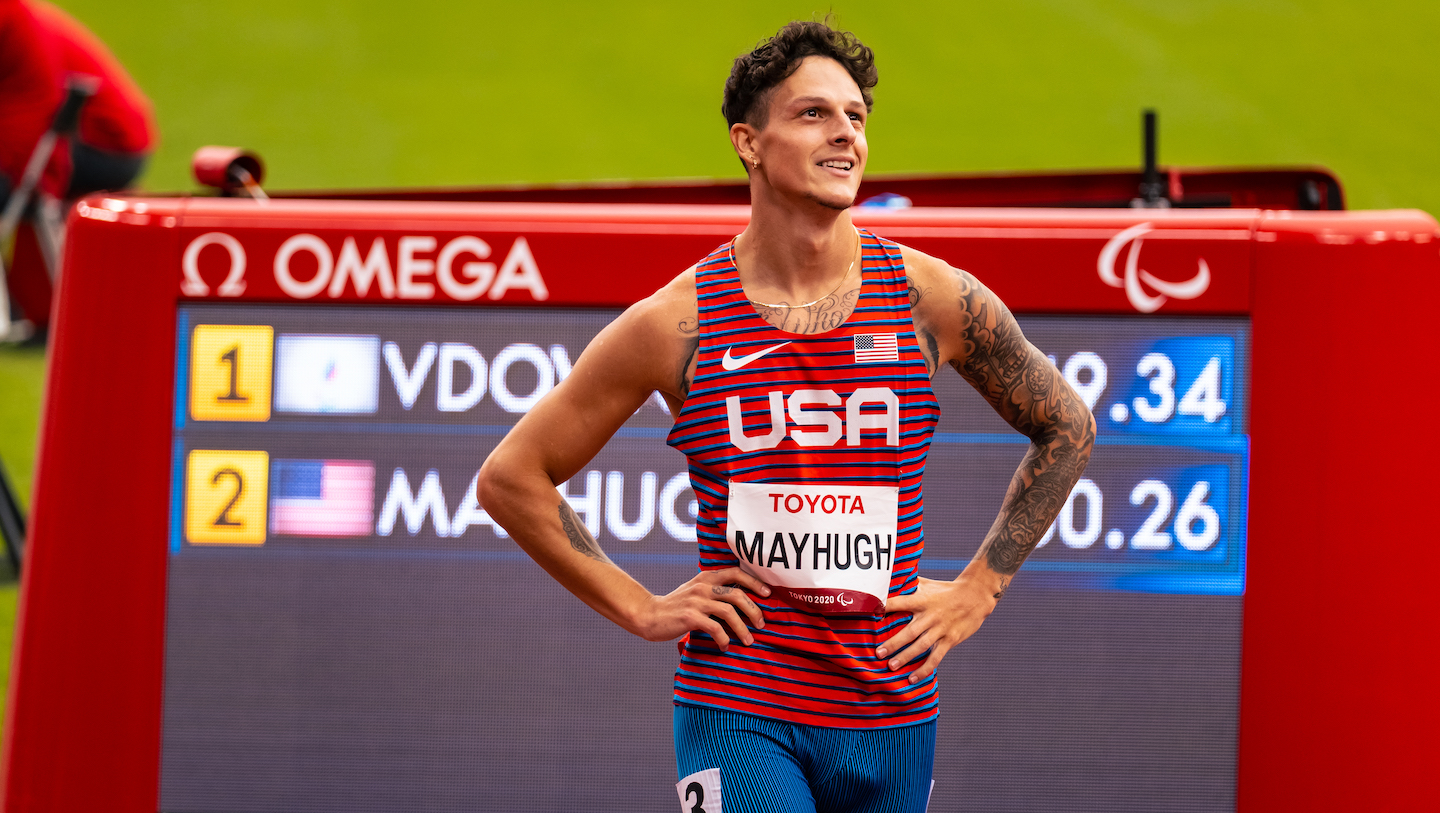 Nick Mayhugh is an American athlete who recognizes that life has some intangible rewards that are better than any medal.

Many know his story, and his perseverance is a true sign of hope for the world. So, we had a conversation to talk about his life, the obstacles he has found along the way, Cerebral Palsy, the world of athletics for people with disabilities, his projects, and more.

Therefore, we invite you to know Nick Mayhugh better in this exclusive interview for Vanity Teen.

A time to beat

VT: How did you make it to the Team USA?

NM: I have been playing soccer for the National Team since 2017. When soccer got cut from the Games in 2020, Team USA recruited me to run track. Then, I said: why not? I wanted a new challenge. I enjoy running, and I love challenging myself. I wanted to see how far I could push myself physically and mentally.

How far can I really go? How great of an athlete can I be?

VT: Commonly, what is your daily routine?

NM: When I’m training full time, I wake up around 8 am, I stretch and meditate for an hour and a half to two hours, eat breakfast, go to the track and train for the morning session, go home and eat, then go to the gym for strength training, then work with my psychical therapist to stretch and start recovery. Then, I go home and enjoy some free time, play video games with my friends, watch a movie, eat and go to bed.

NM: It means that there is more work to be done. It’ll always be special being the first record I set and the first medal I won, but all I see it as now is a time to beat, that I can run faster.

The right direction is education

VT: For those who might not know, how would you describe Cerebral Palsy?

NM: Cerebral Palsy is a neurological disability. Often, it is caused before or during birth. I had a stroke in utero, and it caused a dead spot on the left side of my brain that never finished developing. My entire left side is affected; I have less motor function, nerve function, range of motion, and overall feeling and control of my left arm, hand, leg, and foot. But to the untrained medical eye, you would never notice!

VT: Recently, you have been publicly raising your voice to stand up against inadequate conditions for Para athletes in international events. What would you like to tell our readers so they could understand in better ways what is going on?

NM: I make it a priority to try to educate the public about the Paralympics because so many people just are unaware of the sport. That leads to us receiving less support and acknowledgment, which then allows us to be given less and unequal conditions at events, travel, monetary, etc. We deserve to be given equal to any other sport compared to our “able body counterpart,” and the first step in the right direction is education.

VT: What do you think about the kind of representation athletes with diversities have in current media?

NM: I think it is continuing to grow and moving in the right direction. But, in the Paralympics, a lot of athletes are discouraged when it comes to speaking out because they feel like they don’t have a voice. So, I try to be that voice, to speak and advocate for everyone. We’ll get there!

Better than any medal

VT: You have never considered yourself a hero whatsoever! But, how does it make you feel your story and achievements have been helping many around the globe?

NM: You’re right: I don’t see myself as a hero. I know I have younger athletes and parents who look up to me as a role model, which, within itself, is still crazy to me. But it feels incredible to know my story, and what I’ve done on and off the track has encouraged and inspired people, young and old. If I can have a positive impact on someone’s life to make them happier, that feels better than any medal I could win or world record I could set.

NM: Ha! Do you have enough time? I have a lot planned for the future. I want to do it all! I want to go to Paris and then LA in 2028 and compete. I want to continue learning and working in the fashion and modeling world outside of sport. I am currently in the process of writing my first book and starting my own foundation, amongst other things! I love to stay busy, and there’s a lot I want to do. But most importantly, I want to leave my mark and legacy, both on and off the track. I want to make a positive impact on the world and leave it better than I found it.

VT: Which words would you like to share with those who, just like you, have been told they won’t be able to do something they love?

NM: To believe in yourself. Simple; if you don’t believe you can do it, no one else will. Keep your head down, control what you can control, and do everything you possibly can to make your dreams come true. The first step is to start; everything else will follow.

NM: A few things I love are playing video games, and I love Double Stuf Oreo cookies more than any snack! I stream live at Twitch.tv/nickmayhugh. So, you can watch and interact with me while I play and know the secret to an Olympic gold medalist’s success is eating Oreo cookies! (Laughs).

When I knew Nick Mayhugh was available for an interview, I could not hide my excitement because I’ve been admiring his career so far. Also, I appreciate everything he has done for many people who have been put apart due to being different or having disabilities. Similarly, I must say that I feel inspired by knowing he persisted during difficult times when many people did not believe in him or thought he was lying about his condition.

Yet, sometimes, we forget that being an athlete demands, besides the physical strength and resilience, willpower, and a strong determination that got to be stronger than the force of your body. Therefore, I hope anyone reading this interview and thinking about the answers of Nick Mayhugh may also say the following words that come to my mind while I write the article:

In life, we may have many people who inspire us and, for sure, we call them heroes most of the time, but today, I want to draw attention to one of them.

However, I want you to know that one of my heroes is Nick Mayhugh, but he is not a hero, and he does not pretend to be called one.

Nick Mayhugh is a person who not only had to overcome physical pain; he also had to prevail over the mistreatment of many people who told him that he was incapable of achieving his dreams.

He had to get over the gaze of lots who looked at him as if they were better, and the demons in his head to be reborn in humbleness, peace of mind, and find in track fields and sports a new life that is full of opportunities in which anything could be possible. A new life in which the joy of doing what you love feels better than any medal.

We love you, Nick Mayhugh!

In this article:Athlete, exclusive, Nick Mayhugh