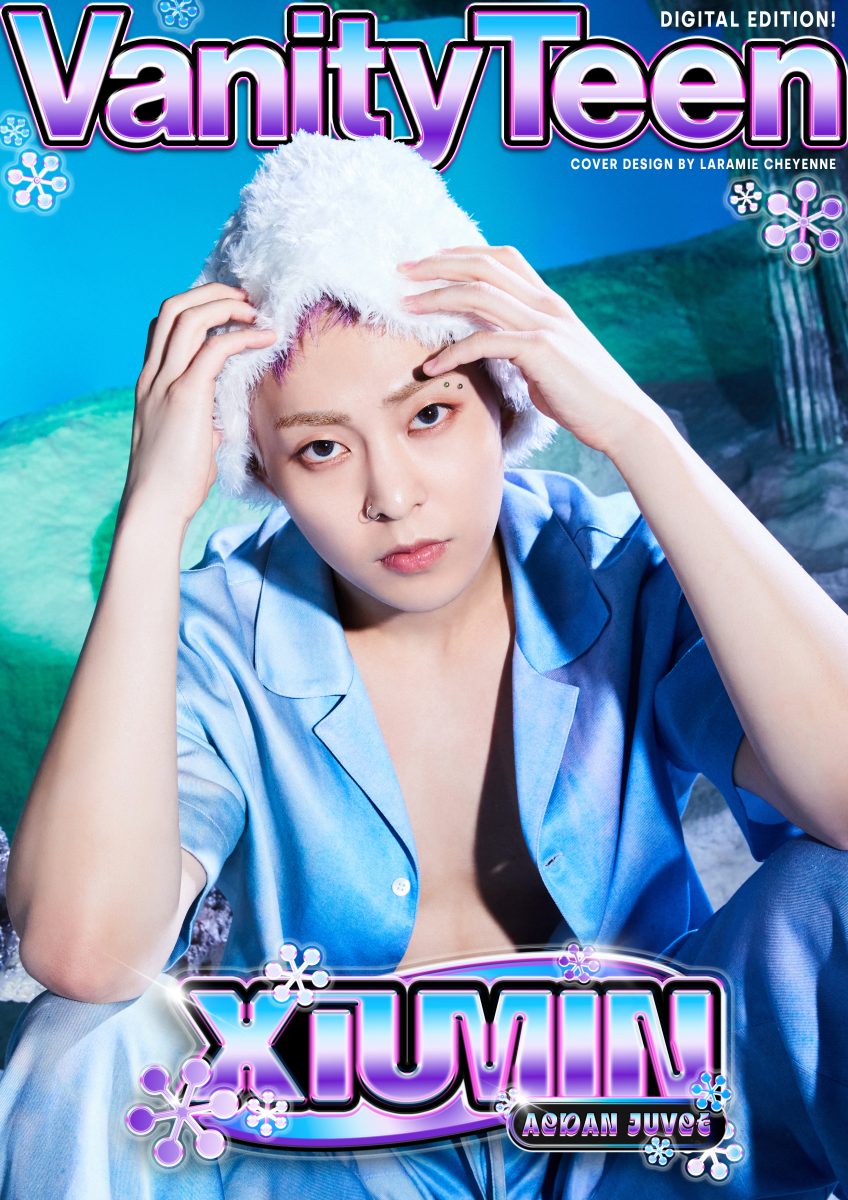 The SM Entertainment group EXO and its insanely skilled members are crucial pieces to the overall legacy of K-pop, widely perceived as a chart-topping, vocally adept selection of artists. Now, after a decade of (regularly) selling millions of albums and inspiring countless individuals around the world – the group’s trailblazing powerhouse XIUMIN (@e_xiu_o) has officially received his first solo maneuver with the debut EP Brand New to showcase his staggering talent without limitations. However, when it comes to XIUMIN, is it even possible to expect anything less than perfection?

Throughout XIUMIN’s comprehensive addition to the influential group’s discography, the singer organically acquired a following for his innate sense of comedic timing, and of course, a voice that can mesmerize the masses. Even as recent as this month, the charming singer continues to have his personality praised courtesy of his commentary regarding cleanliness or more sincerely, having a genuinely humble perception of his own career. So at this point in time, XIUMIN continues to construct an evolutionary career, with his recent solo deep-dive cementing that he’s one of the most admirable artists in the game.

For the freshly-crafted EP Brand New, the singer and dancer revisits a few of his treasured childhood inspirations with a ‘90s R&B sentimentality that electrifies, or on occasion, an exceptional degree of pensive vulnerability. With the title track “Brand New”, XIUMIN seizes the opportunity for his optimal moment in the spotlight, utilizing enthusiastic and retro-themed inclusions that’ll encourage you to move – but still unveiling an ambitious vocal range that’s clearly within the esteemed performer’s reserve.

As the album unfolds it becomes crystal clear that even with his expertise, XIUMIN’s newfound creativity is channeled into a breathtaking timeless story about finding your footing while pursuing your dreams and the universal importance of stepping into your own power. As our new Vanity Teen Magazine digital cover star, K-pop titan XIUMIN is breaking down his diverse solo journey, the EXO effect, and some wildly entertaining behind-the-scenes stories of his very first music video in what we’d describe as the most endearing Zoom call imaginable.

First and foremost, congratulations on your remarkable solo debut with Brand New! This is such a pivotal moment, so I can’t imagine what you must be feeling now that it’s finally been released! When you first set out on this project, what was your primary goal or inspiration behind the album?

XIUMIN: A lot of fans have been waiting for me to have the chance to perform and be on stage again! It’s been almost three and a half years since I performed as an artist, so I wanted to dedicate this album to my fans who have been waiting and anticipating my music and career. When I first decided on this album I was hoping to bring joy and happiness to [my supporters] so rather than focusing on specific goals or records, I really wanted to focus on dedicating and presenting them with the gift of my solo EP. And also, to create happy memories with them through my own music!

Coming from the juggernaut group EXO, you’ve been consistently surrounded by music, so I’d imagine this moment has crossed your mind more than a few times. How would you say your cumulative discography with EXO has helped shape your own solo music?

XIUMIN: As you know from various songs and performances by EXO, I was able to try out different types of performances and genres that are all very different and unique. Those experiences with group activities helped me to understand and figure out the mood and vibe of songs with much more ease. So even when I was recording, it was a lot easier for me to figure out – and truly find the real soul and vibe of every single song. In terms of the performance, just like the recording process, I was able to approach the choreography a bit easier because I had a lot of experience with synchronized choreography from EXO. So overall, I’d say that the group helped me build a foundation in several ways, including helping me prepare my solo music with much more readiness and professionalism.

As an introduction to XIUMIN the soloist, I have to say that “Brand New” is such a perfect track in every perceivable aspect! Did you face any nerves taking on such a high-energy R&B/Pop track on your own, or was this something that felt like an exciting challenge?

XIUMIN: More focusing on the song itself, one concern I had was filling the song from start to finish with just my voice. As you know, in a group song there are a lot of different voices, energy, or tones that are added within a single track. Because of that, I was worried that filling an entire song on my own could sound very mundane or too similar throughout, so I was trying my best to give more dynamics and bring out various changes within my voice. In order to prepare for that, I took vocal lessons and tips about how to bring out the most charms as possible from my own voice. I also recorded the song several times in order to find the perfect version that was heard in the final product, but the overall process of preparing for my solo EP was exciting, and a fun challenge throughout!

Of course, there’s a music video element to appreciate with this era, and it’s a solid mix of precision, style, and even a bit of humor, so there’s no shortage of storytelling! What was probably the most memorable piece of your debut-video experience?

XIUMIN: So a little bit of behind-the-scenes on the [“Brand New”] music video… The process for the video was very dynamic, so we filmed it over two separate shoots in total. In the first shoot, I recall my pants exploding in the middle of a scene, right from the beginning of the shoot [laughs]. And it was followed by an outdoor dance break which was interrupted when it started pouring rain in the middle of the shoot.

And for the indoor shoot, there was actually a small prop that caught on fire… [laughs]. Despite all these mishaps and potential crises that we dealt with… the entire staff met them with a lot of positivity, good energy, and happiness, so I’ll always remember it as a happy memory because everyone was saying that everything good can happen now [after the mishaps occured], which I really enjoy reminiscing about. And, I like to now say that because of all those mishaps in the music video, I believe that all my promotional activities have been proceeding very smoothly without any problems so far!

“How We Do” is a very inviting and nostalgia-heavy song that has effortless confidence to it! What variety of music generally evokes that all-important feeling for you?

XIUMIN: Ever since I was young, I remember just purely loving and enjoying the experience of listening to music, and just being surrounded by music. One of the genres that I listened to the most was the New jack swing style which you can hear in my Brand New EP, so when I came back to this genre for my solo debut, I had a big sense of nostalgia and familiarity, and I felt a lot of comfort recording the song which allowed me to naturally bring out my confidence. This entire recording experience and genre of music helped me remember once again how much I love music and this style of music, so all of it felt very familiar to me.

Then we have “Love Letter” which is a very purposeful and reflective track, with a masterful presentation of vocal abilities. What would you say is one moment or memory throughout your remarkable career that you similarly hold closest to your heart?

XIUMIN: The moment that I actually recall the most in my career was a special fansign and performance event prior to my military enlistment. I remember the first night of my two-year enlistment, I recalled that very moment and thought about how important all of the fans are to me, and it’s something that I’ll never forget not only within the context of my career but in my life. It’s something that really impacted the importance of my feelings for [EXO-L] and it’s a feeling that’s been maintained through this EP because I think [Brand New] reflects a lot of my love, care, and overall fondness that I have for my fans.

You close out the mini-album with “Serenity” and its warm production offers listeners that exact sensation within seconds. What overall ideas or feelings do you hope that listeners leave the Brand New mini-album with?

XIUMIN: The Brand New album has a total of five tracks, and each song has its own unique style. So with all of them, I really wanted to try to bring out various diverse emotions instead of one singular theme or emotion. Most notably, I wanted to showcase some sort of fun and sense of enjoyment, as well as a refreshing feeling that comes from originality. There was also some anticipation, part confidence, love, feelings of excitement, and of course, serenity, like the last song. And hope! Each of these tracks has a symbolic theme and emotion and I hope that fans are able to feel that, experience it, and take that away from my first album.

XIUMIN’s phenomenal debut EP Brand New is available here, and the music video for the title track “Brand New” can be seen below!