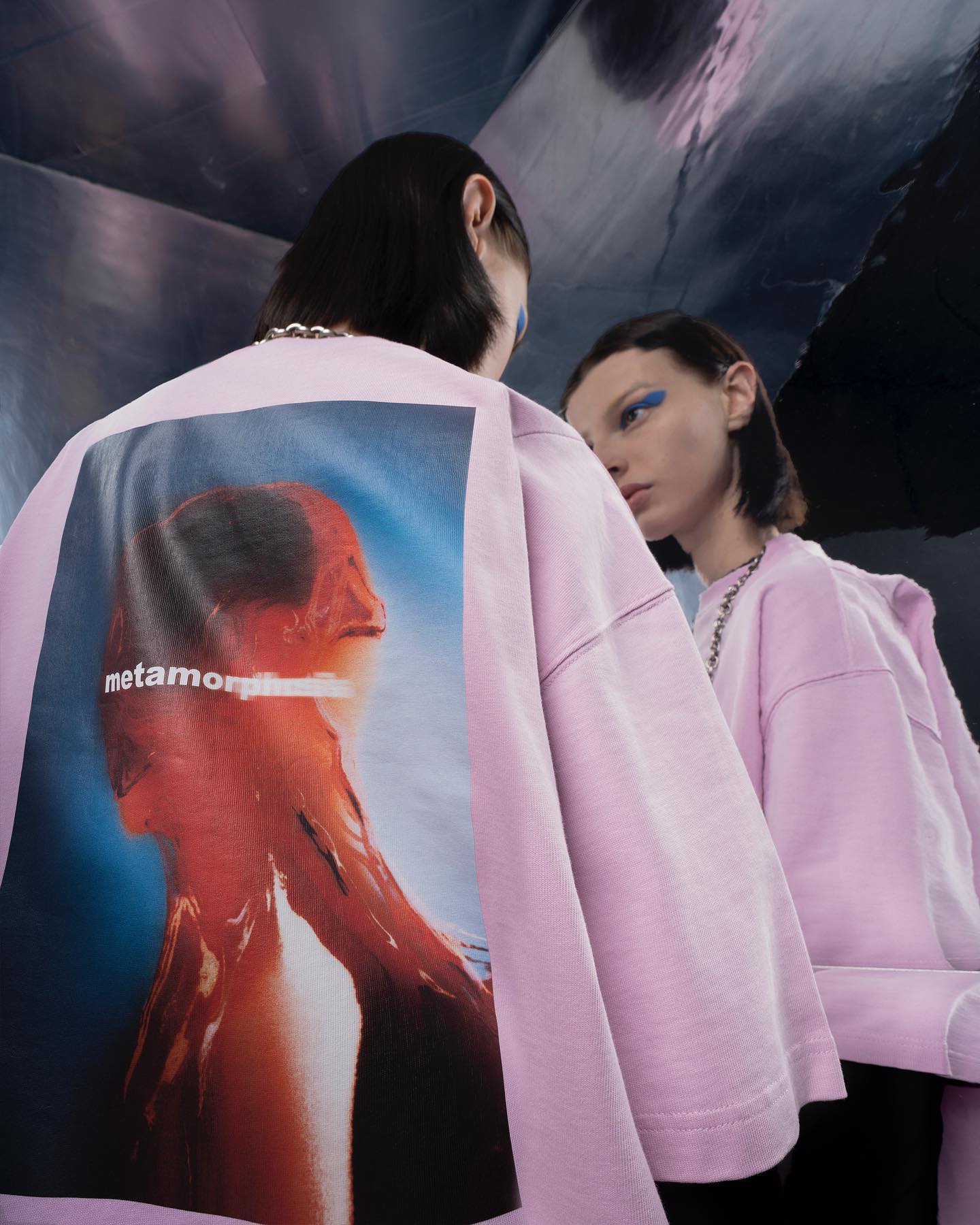 Simone Ferraro and Marco Agnolin started a generational and eco-futuristic revolution back in 2020 through A Better Mistake, a multifaceted fashion brand based in Milan and raised by a series of pillars such as gender fluidity or a sustainable and phygital vision. Although its real vanishing point is and always will be creative disobedience.

A Better Mistake is understood beyond a luxury label that transcends aesthetics and normative canons, making way for a new visual language that merges different perspectives from outside artists, a creative in-house team, and a dissident community that opens social dialogues through fashion and art. A safe space or agora where people can feel free to self-discovery and show it to the world, embracing the beauty of imperfection and destruction.

We spoke to one of the creative co-directors, Simone Ferraro (@madame_inc), about the evolution of this creative and experimental universe where art, fashion and music collide to create A Better Future.

VT: A Better Mistake was born in the midst of an unusual and chaotic reality as it was in 2020. How did you manage to enter the fashion system as a niche and emerging brand?

ABM: A Better Mistake was founded in February 2020, so was two weeks before the pandemic started, which was kind of chaotic but in the same time, I like to work in different situations to kind of break standards. I always think that this helps you to bring unexpected results, and this was the case. The whole team was hired on distance so we worked for four months through zoom calls, knowing each other in the digital space, and that was interesting because A Better Mistake is a company that’s rooted in the digital space, so maybe was the right way to begin this journey.

At the same time, allowed us to slow down the whole process, because when you start a company and you have to be on the market immediately isn’t something healthy for the brand. I believe in deep narratives and messages, and the fact that we could slow down and didn’t drop any collection for almost a year gave us the time and the chance to build the message and the story behind the brand, through very deep research on the fabrics and testing and experimenting with new silhouettes in the studio.

VT: You place creative disobedience at the core of ABM. How do you construct and channel that message of freedom and self-expression through your creations?

ABM: I would say the core of our project is to trigger people’s curiosity and this freedom of expression that you’re mentioning. I think the society now is kind of stuck on concepts that over define everything, like what is feminine or masculine, or what they should wear or shouldn’t wear, and this is creating a big identity crisis in the new generations.

The non-binary phenomenon stands out that people don’t wanna be defined. That they just wanna be appreciated of what they actually are as individuals. Creativity is one of the best ways to trigger this awareness and freedom in people.

I believe fashion nowadays took a very important role in social communication, and new generations are using fashion to express themselves, opening a dialogue with fashion designers. Something that happened for example in the 60s and in the 70s with music as a tool, and what also Virgil did in the industry. We can talk to people and we can spread messages, we can have a conversation, can open dialogues through fashion. I think fashion in terms of just-style and beauty makes no sense anymore. Fashion should be more involved in things like this, into being creative as disobedience, as we say in A Better Mistake.

VT: ABM connects with contemporary aesthetics and values through sustainability and gender-neutral clothing. Do you think your band is contributing to defining the zeitgeist and the future of fashion?

ABM: The aesthetics are not really important to us. I think it’s more interesting to talk about the message and the connection with reality, with the society, bringing this bridge between the old world and the new world. Between the digital and the physical, creating a space where people can feel free to self-discover themselves and to show that to the world. I think this is the contribution that the brand is giving to the future of fashion, and hopefully to a cultural movement.

VT: Your brand dilutes art, music, and fashion in a concept that explores the “digital underground” through musicians and artists such as VTSS, Nim Morrison or Fabio Weik. How do you develop your collaborative creative processes, and how do you balance all that visual codes into the same identity?

ABM: This is a very interesting point. For me, co-creation is a part of our way to create or own world, vision and ideas. At the moment, we are placing it into a project and we’re sharing those ideas with creative minds coming from all kinds of fields.

Most of the collaborations we have done started kind of organically, of mutual interests for each other’s ideas or friendships. Every project is a different story, and I like to change the approach every time: I can start sometimes with a painting or a graphic, from a word… Creativity is in continuous evolution and it’s dynamic, it’s fluid, and that’s how we work.

I’ve always been attracted by the concept of artistic collectives. They have the strength of a subculture and that was the only way for me to build a project as A Better Mistake, which is absolutely a collective of people that just wanna share ideas and merge them into a unique project. Our studio has been thought of as a kind of agora where people can talk about their ideas.

VT: Your designs use to drink from the clubber or techno / electronic culture. What inspires you the most from that universe so you have made it representative in your DNA?

ABM: It came from a personal background. Growing up in Barcelona for more than eleven years as a raver person, hitting the club scene, also in Berlin and London. So that was the environment where I grew up and that was the soundtrack that we wanted to enlighten our narrative.

Also, the brand started in a very dark moment in humanity so we wanted to be very connected with the environment itself. Techno gave me the chance to represent the best of that moment. At the same time, the music itself is at the core of the project, a lot of the guys on the team are musicians, and we tend to produce all our music in our house where we collaborate with different artists.

VT: The phygital experience lands connected with the eco-futuristic revolution in times of climate emergency. How do you merge the boundaries between the physical and the digital, and how this could contribute to reducing the environmental impact of fashion on the planet?

ABM: Fashion has a big problem with sustainability. We really need to find a solution to that, avoiding massive production, using sustainable materials… But overall, the most important point is that we need to slow down seasons and trends. In A Better Mistake, we produce very few quantities of each drop, sometimes we just produce 10 pieces of a jacket. We love to use deadstock fabrics, and we wanna sell something that has the same value today as in ten years.

Talking about the boundaries between physical and digital, I wanna say that I’m very attracted of being in between these two worlds. I like to create something that is completely ambiguous and I’ve got a lot of expectations in the digital world such as a kind of salvation of pollution and contamination. I do believe that the Metaverse will maybe be the answer, but we would have to consider the way that we do digital which also has big costs such as contamination. The key is to create affordable and sustainable digital spaces because otherwise, we are just shifting one problem into another.

I wanna say that I really like digital, not just from a sustainable point of view, but also because its a space where everything is somehow is possible, and where we can go over the boundaries of our bodies and physical limitations and explore our creativity and personality.

VT: Do you think that like art, fashion pieces are not really finished until a user interprets them? How would you like your community to understand Simone Ferraro and Marco Agnolin’s fashion?

ABM: I really like this question. My work is definitely fluid and is always based on dialogue so I could take my pieces and put them in a museum and freeze the concept and the idea that I wanna express, but I find so much more interesting when I can connect with someone else’s world and somehow I lose control of what I do, and how this person interprets that first idea that was established in my mind.

I think that every piece I design it’s gonna be placed in someone else closet and it’s gonna live together with other pieces that don’t belong to my language but belong to that person that is creating a new coding. I wanna trigger ideas in people. I maybe cannot like what you’re doing, but I find it interesting. The adversity of the way you think it’s what attracts me the most, so the way I design or I think it’s completely connected with that vision.

VT: As a visionary brand that explores constant change and metamorphosis, what is the evolution or goal that A Better Mistake wants to achieve in the immediate future?

ABM: We wanna establish this dialogue with our audience and try to put them into a comfortable place where they can feel safe and inspired. There’s nothing better for me to see someone that gets really inspired by a piece of our collection. This is more than business, a trend, or being cool, I do believe fashion has this strength now and that’s where we wanna be in a short term.

In a long term, we have big expectations. It’s just the same thing but on a larger scale. We wanna be part of a generational revolution and a cultural change. That’s where we place ourselves, and that’s what we’ve been doing since day 0, and also what we’re gonna do in the future.

In this article:A Better Mistake, exclusive