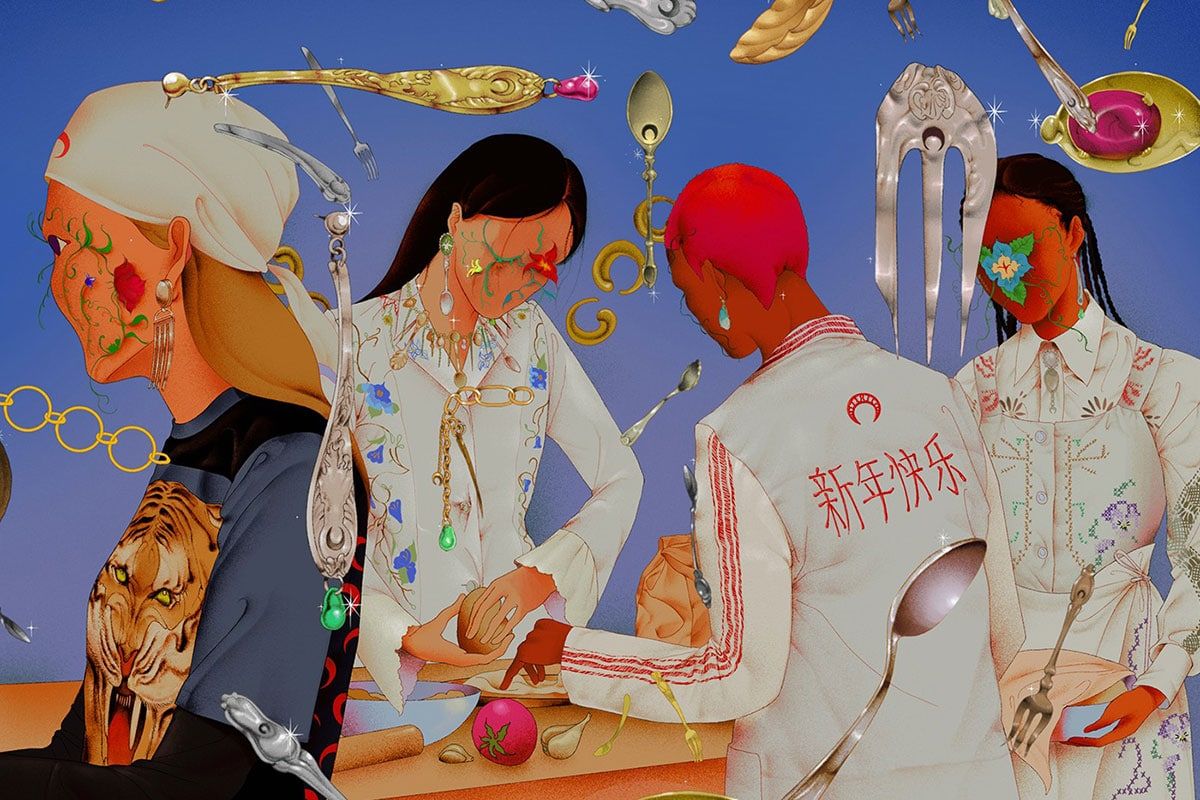 Ram Han is a digital painter known for turning into art empirical fantasies as a way to explore her emotions and desires while subverting the male gaze under a gender perspective.

Her oniric creations immerse us in a series of nostalgic scenes, sexual fantasies or fragmented memories of her 90’s childhood filtered through the magic of virtualization.

That subversive narrative project a unique style that draws from graffiti culture, Japanese animation, or pop media suspended between surreal scenes and metallic finishes. This is how she has entered parallel realities as the world of NFTs, created fashion animations or music pieces for the avant-garde industry.

We had a chat with the graphic artist RAM HAN (@ram_han) about her artwork, digital techniques, or the design stimuli that has shaped all that visual ASMR.

VT: Could you tell us a bit about your background, how’d you started in the art world, and what was your motivation at the time?

RH: From elementary school to high school, I was the girl who was drawing cartoons every break. Then, naturally, I studied animation at university.

Some of my work reads familiarly, while the other side of my work also feels extremely personal and closed. I am inspired by young contemporary visual artists and classical artists from various countries, including Korea. It is inspired not only by pictures, but also by animation, the texture felt on the screen of the game, and YouTube content. That means that I am influenced by all the images that reach me, especially from the media.

As a result, I think my work functions as a filter that shows the world. People will feel empathy, positivity or discomfort felt through filtered images. It’s my motivation to spread the images digested by me to many people. And lately, I am focusing on showing the ambiguity of personal memory between the real and the fabricated.

VT: In your paintings, you illustrate sex scenes and talk about feminism on the basis of art activism. How are your works understood in a conservative country like Korea?

RH: Most Koreans view my work as the result of artistic creation, so most people don’t think my work is particularly problematic. Therefore, there has been no experience of anyone interfering with my creative activities or raising objections. The sex scene itself does not represent either conservative or progressive, but rather pursues only freedom.

VT: How do you approach your digital creations and what is the creative process you follow from the moment you draw the sketch to the final metallic sparkle?

RH: In most cases, all processes are started and completed through Photoshop. When I’m working I try to use the tools freely without any restrictions. I love drawing shiny textures, even though it takes the longest time to express the highlights in the work process.

VT: You’ve collaborated with k-pop artists to create a series of covers, as well as illustrate clips such as Oklou’s ‘I didn’t give up on you’. How do you translate music into your own artistic language?

RH: I try to imagine the intention of the musician as much as I can. In fact, artists who collaborated together suggested a lot of amazing ideas. Whenever I collaborate with artists in other fields such as literature and music, I feel that the world that can be expressed expands itself. I’m endlessly grateful for those opportunities.

VT: Your work style draws on nostalgia, fragmented memories, colors, and textures that you saw in cartoons, on TV, or in the media during the 90s. What’s it that inspires you from all those visual formats and what kind of emotional connection lies behind it all?

RH: When I try to express something I aim to create an image that conveys a specific impression itself, even when the resulting image is fragmented. For example, when I create a monster-like flower that cannot be seen anywhere else, I want to depict the color and texture of a genuine cartoon on the flower. I like to mix imagery derived from the ambivalence of my sensory impressions because, like many people, my childhood is likewise composed of a chaotic mass of emotions enveloped in a wrapping paper of happiness.

VT: The finishes of your digital works seem to allude to the universe of graffiti and airbrushing. Which works or artists had an effect on you to turn this technique into an identity code for Ram Han?

RH: My early works have been inspired by the airbrush art style of the 1980s for several years. Or I also like the feeling of silkscreen T-shirts that are often seen in vintage stores. Currently, along with this retro texture, I prefer the finish of the smooth coloring surface used in the artwork game. Cell-type 2d animation often mixes the coloring method in which lines and surfaces are clearly distinguished. The artist who has always inspired me the most and his work are Hayao Miyazaki’s Nausica in the Wind.

VT: You recently teamed up with Marine Serre to create a series of animations celebrating The Year of the Tiger. How did this creative union come about, and what does this series project?

RH: Marine Serre has first requested artworks that are suitable for the Year of the Tiger. I made a total of three artworks – The first illustration is a scene where a tiger is eating food symbolizing the Chinese new year. The other two illustrations are directly inspired by their 2022ss collection movie, Ostal 24.

VT: Looking to the immediate future, we’d like to know what do you think about the metaverse and whether you see yourself in it by turning your works into NFTS.

RH: Before the term metaverse became so overused, we were fully immersed in this world through games, literature, and movies, we could already vividly feel the virtual narratives and existences that make up the metaverse.

While newly developed technologies are not always evenly or beneficially incorporated into our lives, I think that it is only a matter of time before those qualities become true. I think the technology of NFTs is value-neutral and that there are good reasons for us to remain interested in technology within the art world. I will continue to pursue related projects in the future.

In this article:exclusive, Ram Han