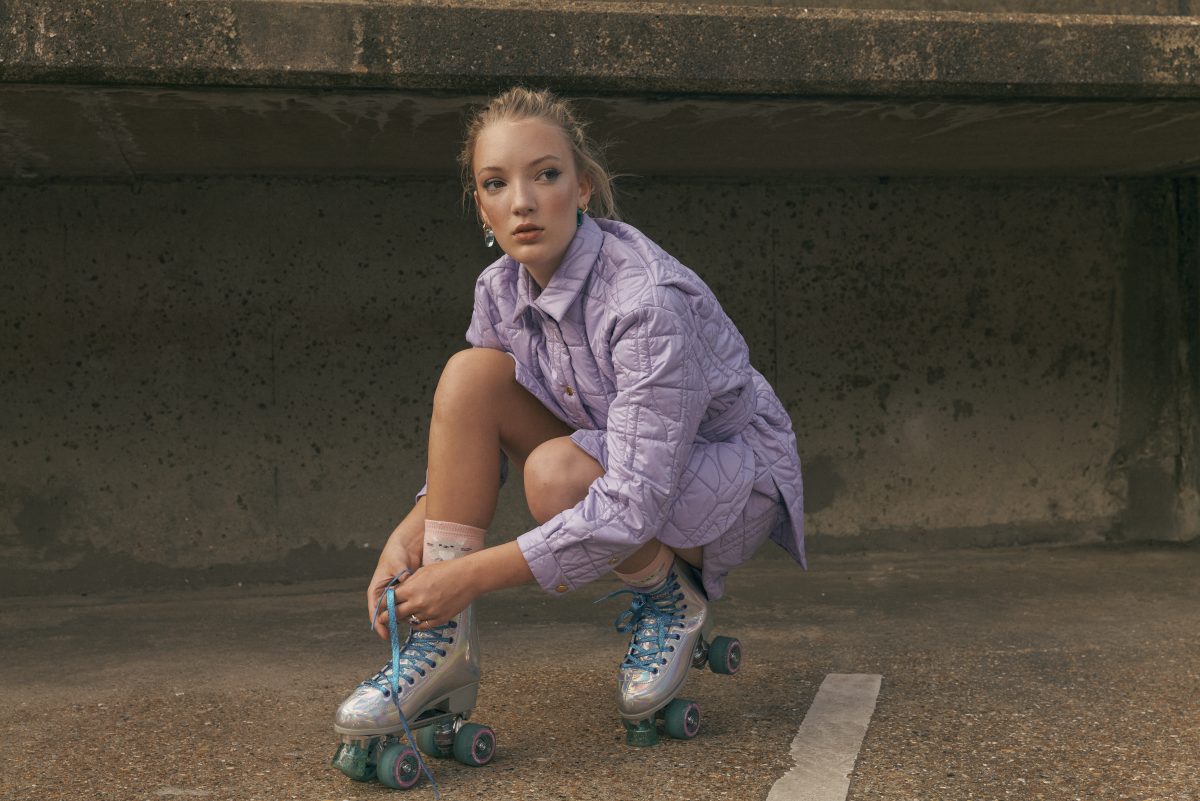 Raffiella Chapman invites us to take on new challenges; one of them is being aware of the power of film and media to motivate us to improve current situations as we think about others. Also, in this exclusive for Vanity Teen, the young actress shares with us about her well-received film Vesper and some other projects on her way.

So, we hope you enjoy this conversation and be ready to see an intimate side of Raffiella Chapman. We know you are going to fall for this must-watch young artist.

Passionate about the arts

VT: How do you feel about being an actor finding your way, and getting recognition for your talent?

RC: It’s been really rewarding to get recognition for my work, especially for my first lead, Vesper. I knew when I took on the role that it was a huge responsibility, that I would be in every scene, and if my performance wasn’t strong enough, the film would fail.

I was only thirteen when we were shooting, so that felt like a big responsibility! But it was a responsibility I felt ready for and excited by. I don’t read reviews because I’m not sure it’s always good for the soul. But every time my mum shares another positive quote about my performance, I feel a deep sense of relief! Everyone involved put so much hard work into making the movie really special, and I didn’t want to let them down.

VT: How did you realize you like acting and wanted to pursue a career in film and media?

RC: I’ve always been really passionate about the arts, and some of my earliest memories are of the theater or sitting in a cinema and feeling that excitement when a movie comes to life on the screen. I think, in my heart, it was something I always wanted to be a part of, so when my ballet teacher asked my parents if I could go to an audition with her son, who was a good friend of mine, I thought it might be fun. The director was looking for real siblings or very good friends who already had a bond. It turned out to be The Theory of Everything, and I was cast as Lucy Hawking.

I remember it just being really good fun, playing on the beach, sitting on Eddie Redmayne’s lap while we whizzed around in an electric wheelchair! Eddie and Felicity Jones were so kind, and I remember watching them act and feeling the magic of movie-making even then. I was only six. Afterward, I asked my parents if I could do some more acting and was really lucky to be cast in Miss Peregrine’s Home for Peculiar Children.

It was almost a whole year of traveling and hanging out with the other kids. It couldn’t have been a more exciting and fun adventure, and I was hooked. As I’ve gotten older, of course, it’s become less about having fun and more about engaging with the characters I play – honing my skills and trying to be the best I can possibly be as an actor. But that buzz of excitement when I step on set is still there. I can’t imagine doing anything else now.

VT: Which other passions do you have, and what do you do to develop them?

RC: I love contemporary dance, and I’m currently taking my GCSE Dance. I’m fortunate to live in a town with an amazing contemporary dance school and work in classes and one-to-one with a wonderful teacher. I’m also a voracious reader. So, I never go anywhere without a book! Usually, a fantasy novel involving vampires and demons!

VT: You have been part of famous projects like The Theory of Everything or His Dark Materials. So, which learning do you cherish the most about those and other previous work?

RC: Every project is a new learning experience, and I find just as many lessons working with an A-list Hollywood director as I do working on a low-budget indie movie. Recently, I’ve been working with an amazing director, Bindu de Stoppani, on a contemporary adaptation of The Tempest. I play Miranda, and we shot a short teaser for the film to help attract funding. It was the first time I’d done any Shakespeare outside an English Literature class, and I had to learn very fast.

We shot the whole thing on location really quickly, so I had to adapt to the challenges of the environment while working with Shakespearean language and still making it feel as natural and contemporary as possible. Bindu was incredible to work with and taught me so much in a very short time.

VT: Let us talk about one of your most recent projects. Vesper is a film that has been receiving fantastic reviews. Therefore, what would you like to share about this movie and the character you portray?

RC: Vesper is a coming-of-age story with a very timely ecological theme. It’s also about the disparity of wealth and where we may be heading in the not-so-distant future.

Vesper herself is a thirteen-year-old girl trying to survive in a post-apocalyptic world while taking care of her paralyzed father. She wants a better life for them and won’t stop until she gets it. Ultimately, the film carries a message of hope for the future of the planet if we could all just be a little bit Vesper!

VT: Vesper also shares a message of kindness, acceptance, inclusion, and hope. All topics you like to promote. So, how do you film knowing your work can motivate people to talk about things you care about in everyday life?

RC: I was attracted to the project because of the urgent message it carries. I do really believe we have to have hope for the future; we have to respect and care for the planet and each other. My mum has always used this phrase: “Kindness costs nothing.” And I try to live by it in everything I do.

I hope people will watch the movie and feel motivated by Vesper’s resilience and passion for playing their part in fighting for the future of this planet.

Vesper, in the film, has a line: “You don’t just give up when things get hard.” And I really believe that!

We have endured the most unimaginable things these past two years, and, for many, it is not over. Humans are resilient, and we need to harness the power within ourselves to stand up for what we believe in and do the right thing. And I think that starts with kindness.

RC: I have a small part as the Angel of Judgment in a film called Sweetbrother, directed by a wonderful director Layke Anderson, and I’m attached as lead to a really exciting project shooting next year. Right now, I’m sworn to secrecy, but hopefully, I can share it before too long!

RC: I hardly use social media, and I think that helps, but I also try and make time to do things that relax me: like taking long baths, skating on the seafront, or hanging out with my closest friends. I think being with people you love is really the best thing for the soul, and I’m lucky to have the loveliest group of friends. Just hanging out with them and gossiping over a Bubble Tea is my idea of heaven!

VT: Which message do you have for those who use film and TV to feel inspired or seek hope?

RC: Watch films and dramas that make you feel good or help empower you to take on new challenges. I don’t think it’s surprising superhero films are so popular at a time when people feel so helpless. But a superhero isn’t going to swoop down and save us – we have to be the superhero ourselves. Maybe those films can teach us how to be that, how to be better, and how to be our saviors.

RC: I’d like to share a quote from environmental activist Vandana Shiva which I think has a really important message we could all learn from, including Vesper: “You are not Atlas carrying the world on your shoulder. It is good to remember that the planet is carrying you.”

I love how Raffiella Chapman kindly reminds us that taking on new challenges does not have to be something you individually enjoy yourself or only it is for your pleasure. Instead, it could be thinking about our future and doing our best for this world, the house we all have in common.

To know more about Raffiella Chapman’s work, I invite you to watch Vesper and the rest of her projects. Also, you can follow her on social media @raffichapman.

In this article:Raffiella Chapman, Vesper