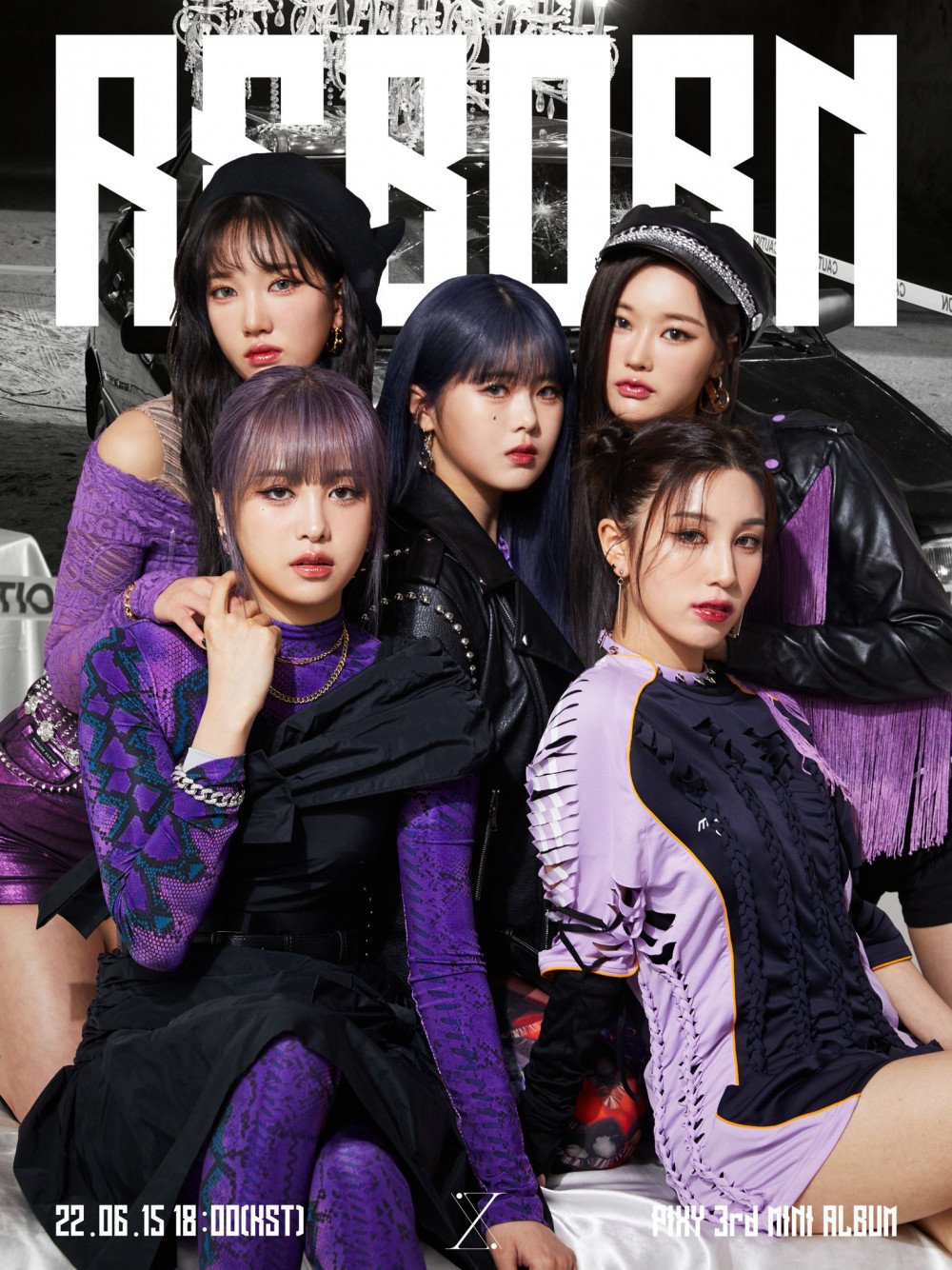 Despite having debuted in early 2021, the K-pop girl group PIXY (@pixy_official_) has released three uniquely produced EPs and a single album, which arguably makes them one of the more ambitious rookie groups of this era. Though of course, after labeling themselves as being the embodiment of a whimsical, energetic pixy, the group’s six members have felt the need to apply their bewitching concept to each saga of their artistry.

Over a short period of time, they’ve thoroughly explored pixy-like inspirations in both ideas and sounds on two prior EP’s titled Temptation and Bravery, so PIXY’s recent release Reborn signifies an advantageous opportunity to re-tool their passion with the lessons they’ve learned along the way. In fact, the group’s chemistry has already impressively garnered nearly 10 million views for their official music videos to date – but this new lead track labeled “Villain” on Reborn allows them to challenge the intriguingly chaotic atmosphere of their own respective discography.

With plenty of youthful attitude, confidence, and just the right amount of sincerity, the technical perspective of PIXY’s Reborn appears to be a perfect time to discover the group’s suprising versatility (if you haven’t already).

In our recent conversation with the five active members of PIXY, the current lineup breaks down their new EP, memorable music video experiences, and switching up their sound.

First of all, your group concept is something I have to address because there are so many potential sounds or styles that you can explore which makes this group particularly exciting! Now that you’ve had time to discover your own preferences and experiment as a group, how would you now describe PIXY in 2022?

PIXY: We tried to get rid of the concept of dark fantasy, which PIXY has been continuing, and show you a more trendy, chic, and cheeky side of PIXY through the concept of Dark City!

You debuted during the pandemic, and I know that has had its own unique obstacles for groups like yourself – but within a span of several months, you really developed a kind, supportive audience! What would you say were some of the biggest challenges and successes of that debut period?

PIXY: We were upset because there were a lot of schedules that we couldn’t enjoy with our fans due to COVID-19, but now we have fans in front of us whenever we perform at music shows, and we can have a face-to-face fan signing event without an acrylic board in between, so we think we will enjoy more.

In the two years that you’ve been together, which member(s) would you say embodies the primary ‘pixy’ persona the best on and off stage?

PIXY: I think it applies to all of us. Unlike our charisma on the stage, every member actually seems to become really innocent and childishly mischievous off stage!

Moving into your newer music, I had the privilege of previewing the tracks prior to our interview, and feel like this might be the most refined version of PIXY that the world has seen! What narrative elements from Reborn were some of your favorite aspects to present?

PIXY: Before, we had a dark and intense concept, but this time, we tried to approach to our fans with a more sophisticated and popular style. Fortunately, a lot of people told us about this, which made us feel very proud and happy.

It also feels like Reborn is the perfect title, because of the evolutionary growth you’ve shown as PIXY! In what ways would you relate the album concept to this PIXY era?

PIXY: Reborn, our 3rd mini-album, means “rebirth” when translated. It’s an album that contains stories that PIXY will talk about after the previous universe. It’s like an album for our new beginning, so it has a new concept.

I like that there are some softer lyrical moments on Reborn, a radio-friendly pop music style, and even a little funky/retro inclusion at the end! Was there one style on the album that happened to be something that PIXY has been eager to try?

PIXY: There are various genres in this new album, so I think we were able to try all the styles that we wanted to try so far.

For your new music video, what would you say was a highlight moment that you were each the proudest to be a part of or proudest to shoot?

Lola: I think the hacker scene, which we haven’t shown throughout the music video, was the most unique. I think it was the scene where I had to show my acting skills the most.

Satbyeol: I felt most proud when I filmed a scene where I was dead with my eyes open on the table! Everyone complimented me for acting well even though it was raining.

Dia: I think all the group dance scenes came out so well!

Sua: There was a scene where I had to break the jewel box with a golf club! I’m proud of myself for breaking it well because I only had one chance to shoot the scene!

Dajung: If you look at my solo scene, there is a part where I put on lipstick and write PIXY on the mirror with it. When the directors saw my successful handwriting at once, they complimented me for expressing it well. I think the face and atmosphere came out well, so I want to pick it as the highlight of the music video!

You’ve shown people so many different talents and facets of PIXY so far, but what kind of ideas do you soon hope to convey as a group?

PIXY: We want to show you our own colors and emphasize the unique qualities that only PIXY has! We think we will be able to show them through a variety of music.

Individually speaking, what types of goals inspired you to enter the music scene? For example, a certain style of music, songwriting, producing, performing, etc.

Lola: Everything is important, but I want to do more performances that I can directly reach out to the fans and the public.

Satbyeol: I started with the hope that a lot of people can feel relaxed and happy watching our performances.

Dia: Even as PIXY, I want to show the public great performances and I want to work hard so that I can produce a lot of good songs on my own!

Sua: I hope we can have more opportunities to perform with WINXY from all over the world!

Dajung: I hope there will be more days where we can enjoy our performances with WINXY from all over the world!

In this article:exclusive, k-pop, music, pixy