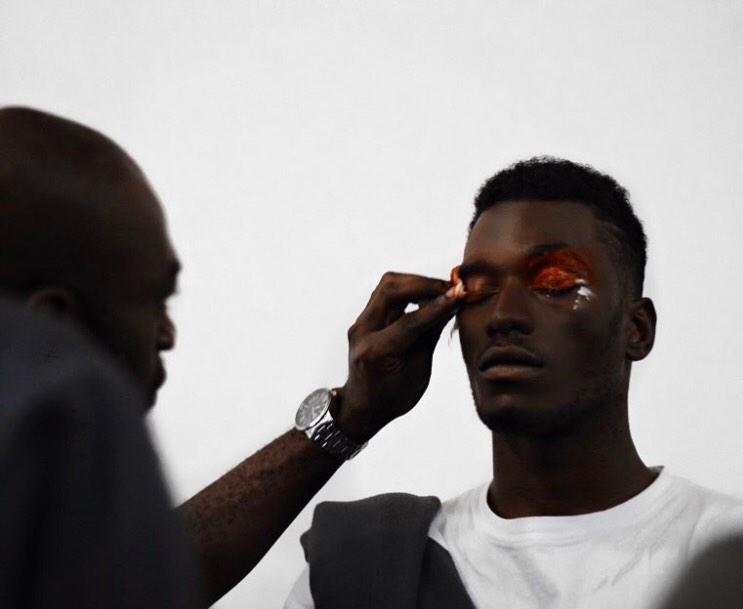 Just like most career paths, makeups, beauty and hair artistry was thought to be something people of the feminine gender should be found doing. It was reasoned to be surprising when people of the male gender did them. It was even all the more surprising when men expressed their artistry in beauty and hair especially in a third world country as Nigeria.

However abominable it seemed, there has been quite a number of Nigerian men who are damning the stereotypical consequences of involving themselves in this industry. To some, they further discovered themselves in the process; to others, they found freedom, acceptance, esteem, and expression.

I had the honour of sitting with one of Nigeria’s renowned male makeup and hair artist, with whom I conversed with, as he generously shared insights on some of the things he’s experienced, loved, fought for/against, accepted, and encountered during the course of his journey.

Uchenna Enyokwa is the brains behind the prominent Sutchay brand that officially kicked off in 2017. The freelance artist with a niche in Bridals, Beauty and Editorials admitted to having a particular love for makeup artistry at a younger age; but just like every other person, decided to first earn a college degree before following up with his passion.

Towards gaining a standing in his career path, Sutchay as he is popularly called started off assisting his then best friend whilst in the university. They worked together from makeup to fixing weaves, and just generally making women feel prettier.

After graduating from the university, Sutchay’s first line of work was MUD Cosmetics, a Canadian company with a franchise in Nigeria. This was around 2012, where he further gained grounds/recognition, as he learned about the hats and tricks surrounding the industry. During this period, he’s also made a few friends.

Speaking of friends, Uchenna had admitted to losing a lot, as he is currently trying to keep a smaller circle. Besides the typical mockery he’s received as a male makeup artist in a Nigerian college, there’s been the uncertainty of “friends” concerning the impracticality of a Nigerian man involving himself in such line of work.

“I am very grateful for my parents. They never had any issues with me growing up – my resilience, my perceived stubbornness, or my being rebellious. I have travelled from city to city, and I have successfully taught over 10,000 students the artistry involved in makeup, bridals, beauty, and hair. I have worked with models and designers, alike. I have done campaign shoots with Lancome Beauty Cosmetics, and Uoma Beauty. I am one of the main judges in a Makeup reality TV show, Urbanface Show. One of the best parts of this job I have come to appreciate is seeing my clients appreciate my works, as they feel really empowered after a job well-done. Nobody comes to my face to say anything, so I think I’m good”.

Uchenna, who has credited the bulk of his work to the iconic Beyoncé, and admitting she had been a huge influence on his journey, draws our attention to the increasing stereotype that even though people thought it was okay for a man to be a makeup artist; they had to be femme – of which he isn’t.

To the younger generation of male makeup artists both in Nigeria and everywhere around the world where it seems very illogical, Sutchay encourages you to have mentors as he’s had with Sir John, Kilprity, and Dave Sucre. He’s encouraging you to be real and original. In his words, “Femme or Butch, Nobody Cares. You’ll only make it when you’re yourself”.

“Once you’re yourself, you’ll make it. For me, it was all about originality, authenticity, and knowing what I wanted. I’ll admit it has cost me a lot of people; and even though I still have my down times, watching people achieve so much even in the midst of this hardship, had been such a major source of motivation for me”.