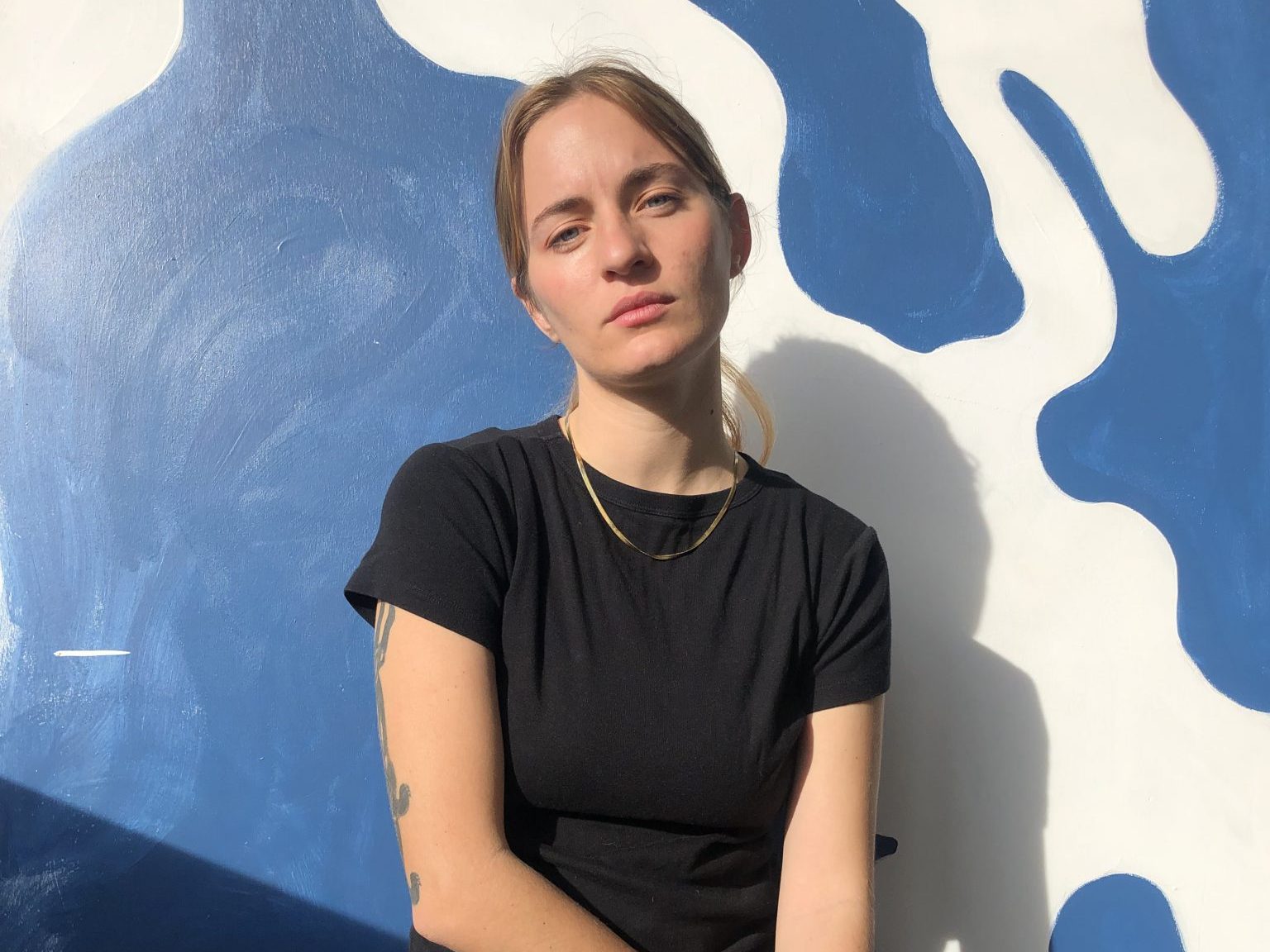 Camille Potte is this groundbreaking young female illustrator who has been gaining recognition for her bold and empowered drawings and for being a woman who stands up and raises her voice in a field that commonly is like an all-male group. But it was about time that things began to change.

She is so witty that having this conversation was a total pleasure you would not want to miss. And even more, having in mind that every March we celebrate the Francophonie month, let me remark that she taught me one of the funniest yet most useful French expressions I had not ever heard before: la crêpe du chien. So I invite you to keep reading to know more about Camille Potte’s work and the meaning of this particular phrase.

My favorite sensation in the world

VT: For those who might not know you, how would you describe yourself? Who is Camille Potte?

CP: Hi! I’m a french illustrator and a comic drawer. I was born in Paris, studied in Brussels, and now live in Marseille.

Mostly, the inspiration for my work comes from seventies underground comics and goofy cartoons. I like color saturation and bold blacks, weirdness, and flexible lines.

VT: How did you find out drawing was a powerful way to express yourself?

CP: Honestly, I’m not sure that I’ve ever really «chosen» drawing as a medium. I hope it doesn’t sound too cheesy, but I’ve always been drawing for as long as I can remember. It’s probably my favorite sensation in the world; it’s at the same time soothing, hypnotic, and thrilling.

After a whole day at the studio, I feel dizzy and need a bit of time not to be super weird with other humans. So I’m feeling extremely grateful for being able to do it every day as a job; it still is a bit surreal to me.

The part that I feel like I’ve been able to choose are the themes and narratives I draw about. Drawing is like telling a story, and when you tell a story, you make choices. In my opinion, this is where it can really get powerful.

VT: Have you ever felt underappreciated for being a woman in the world of illustration? How so?

CP: Unfortunately, illustration, comics, and most work fields are traversed by gender bias.

The comic world can be quite a Boy’s Club.

A «fun» fact is that, for several years, when I was presenting my work at festivals, some people would come to my table and be surprised by the fact that I’m a woman because Camille is a gender mixte name.

That means that my work, as it was different from the idea that they had of a girl-type of drawing, was by defect a man’s work.

And the worst part was this: I was flattered by this confusion. Ugh! I’ve been questioning this feeling since then, and fortunately, I’ve been working a lot with women and queer people for the past few years. It has been like wearing a brand new pair of eyeglasses, cleaner and adapted to my sight.

I want to tell interesting stories

VT: Thinking about your previous answers, how do you use your art to promote female empowerment?

CP: When I work, I like to question the point of view and the type of narrative I am building or participating in.

Politically, I think it is extremely necessary; but to be honest, I especially do it because I want to tell interesting stories. And changing the perspective of a story or participating in the building of other types of gaze is, in my opinion, some really great tools to do so.

When I write, I always have in mind this conference by Chimamanda Ngozie Adichie, «The danger of a single story.»

VT: Benoît is a bold way to share your art with the world. What would you like to tell us about this book? Are you planning future publications?

CP: I am very happy that you’re asking me about this project in particular. My mother is working on several medicalized residences for people with disabilities. And she’s also a writer; her very first novel will be out next September.

In 2020, she sent me several stories, like tales, about her workdays. One of those was about her encounter with a young man and the echoes that it provoked within her. That was «Benoît,» and I immediately had the drawings in mind while reading it.

Later, it became a little comic book quite quickly; and the first edition is almost out of stock.
Currently, I am working on my first long graphic novel. It’s a combination
of three crossed stories that take place in a fantasized Middle-Age.

I’m also working on an all-animated music video that will be out in mid-May. I’ve never done that much animation, and it’s very exciting. It’s also a tremendous amount of work.

VT: You also collaborate with musicians in the artwork for their albums. How is the experience of syncopating your creations with the work of other artists?

CP: I love it. When I came back to Paris after my studies, I wanted to draw concert posters really badly.

Since nobody knew my drawings at that time, it wasn’t easy to get people to ask me to work. I’m a bit monomaniac, so I went to see Michele Santoyo, who organizes indie concerts in Belleville and asked her repeatedly if I could do posters for her. We started with one, from time to time, and a year after, I was drawing three posters a week for those gigs she was planning; it was awesome! We had to stop because of the COVID crisis, and I miss it a lot.

Anyway, the work I did then started to get around, and several musicians asked me to collaborate.
What is quite amazing is that I’ve always been working on projects that I really enjoyed, like David Numwami’s, for example. And when it happens, then the work gets so easy. It’s a bit like synesthesia: if I like a song, then it will immediately have a color, a shape, a story in my mind.

Actually, one of my dream projects would be to work on a whole comic based on a music project, or even created simultaneously with the music, to really dig that osmosis.

VT: Similarly, you have also collaborated with fashion artists. What is it like to know people want to include your creations in everyday wearable items?

CP: It is over-exciting. One of the first ones I’ve been working with was Jacquemus, two years ago. For that project, I had the opportunity to work alongside Ousseynou Salla, a very close friend. It was great!

When we went to see the patterns on actual fabrics, I felt so satisfied with my work! I hope it doesn’t sound pretentious, but it is rare for me to be able to think: «OK, I’m legit.»

The collaboration I worked on with Carne Bollente is out now. I can’t wait for you to see it. I loved working with them, it was one of my best experiences as an illustrator, and the result is beautiful.

VT: Many people talk about creativity as if it were something you snap your fingers and happens, but have you ever felt like you are going through difficult days to keep creating? What do you do to stay productive?

CP: I actually have a whole theory about this. For years, when I had those awful days where everything I drew was absolute garbage, I felt like it was the end; it was like my ideas tap had dried out forever. But recently, I remembered an expression my parents use when they bake crepes: « la crêpe du chien,» the dog’s crepe.

That phrase is use to describe the first crepe you try to do, which is always a fail, and that you give it to the dog (because the dog doesn’t care about the way its crepe looks).

When I work, I actually have to go through a «dog’s crepe moment» because my brain or my fingers aren’t hot enough, because I’m stuck on a single visual idea, or for so many other reasons.

Those moments are extremely frustrating but essential to the creative process; this is where I reload energy.

Learning to accept it can unlock a new way to approach the feeling of emptiness and also just help me not to be desperate. And then, when the flow comes back, it feels so good.

I sound like a monk right now, but I’d like to reassure you that there are still some days when I want to throw my desk through the window.

CP: I would say: don’t be afraid to ask questions to your peers, embrace the dog’s crepe moments and get a public library card. And also, if you happen to run into me in a public event, come to say hi!

CP: I honestly would like to take this opportunity to share the work of Les Hijabeuses, a citizen campaign that battles for the right to play football in official competitions for Muslim women who wear hijabs (which is actually allowed by FIFA but not by the French Federation). You can sign their online petition via their Instagram account: @leshijabeuses.

Thanks so much for having me!

One of the things I like the most about Camille Potte is that she does not pretend nor force herself to be a woman opening new ways for plural representation, and yet, she achieves that and more with her work, with the kind of work she loves to do.

Maybe, defending your beliefs and working hard for achieving your dreams is inspiring, and that is just what I perceive from her work. Nevertheless, I invite you to get your conclusions as you enjoy her work, so stay tuned with Camille Potte following her on social media @camillepotte.

And remember, let us embrace the dog’s crepe moments!

In this article:Camille Potte, exclusive, Illustrator