It was inspired by the fun and adventures of the troublesome twins Lucien and Wayne Cramp, from the famous cartoons “The Cramp Twins”. These two brothers were nonidentical twins, their personalities continually clash and they rarely get along. On this fashion editorial, the team also wanted to reflect in a fun way what’s a brotherhood like when you have a twin, and how personally different two brothers can be even though their appearance is exactly the same.

The first idea the team had in mind was just the story in between two brothers who have similar ages but that were very different from each other, like same blood but opposite personality. However, they found Vova and Valen, real twins, and they thought they could be a perfect match to represent what they wanted to do.
“The outcome was great because, in the beginning, we were afraid that if we put two
models that do not know each other, the story would not be as realistic as we wanted. But
when we met Valen and Vova, we realized that the mutual understanding between them
would make our work much more credible and real.”

For the photos, the photographer used a Canon 5D Mark III, and for the video, Laura del Muro @lauradelmuro, camera operator and editor used a Panasonic G7 with a Stabilizer Zhiyun Crane. Then all the pictures were printed and scanned to give that feeling of a family photo album to make the project even more authentic.

The models are wearing an array of clothes from different brands such as Rubearth, Dalal Alhasan, Carhartt, Calvin Klein, Loreak Mendian, Gucci, DoctorMartin, Koa Press, Pelonio, and Teresa Tarrago. The makeup was the work of Laura del Muro @lauradelmuro for I.C.O.N @iconspain and Termix @termixoficial. 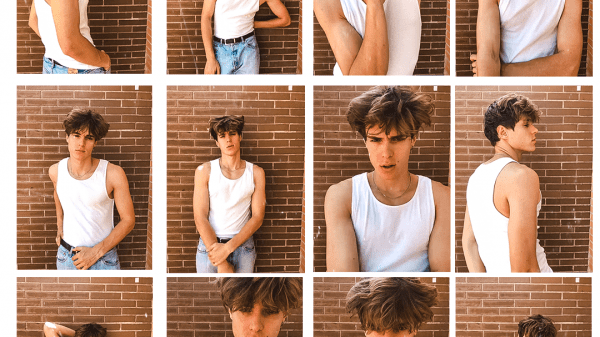