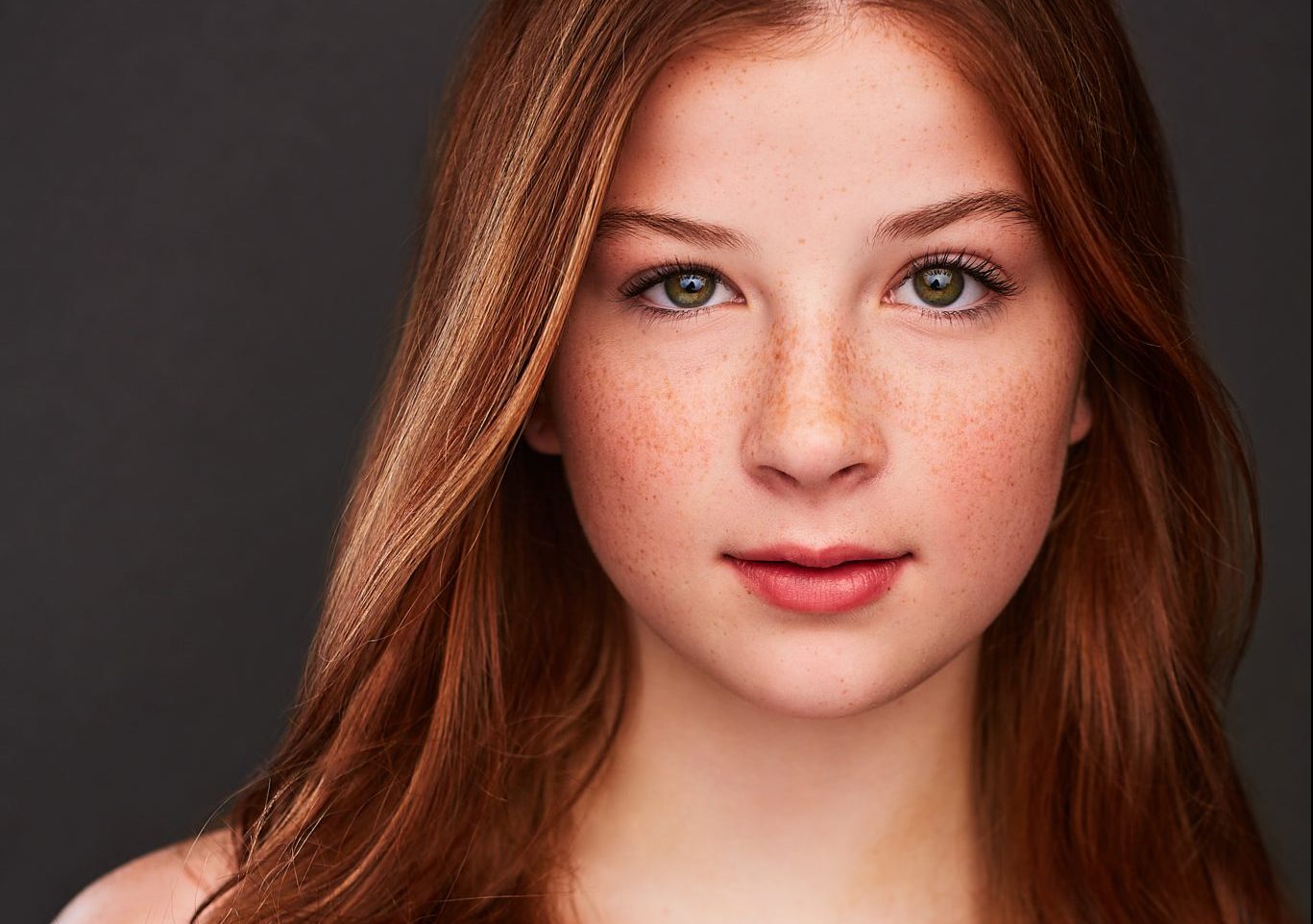 Taylor Paige Henderson presents her role as the young Winifred Sanderson in the highly anticipated Disney film Hocus Pocus 2, available everywhere on Disney+. In this conversation with the young actress, we talked about this unique experience, her career, and some other aspects that now help us to get to know her better.

However, what I enjoyed the most about the interview was realizing how our beloved Taylor Paige Henderson let us know that being a feisty and bold woman is something to admire. How so? Find out more exclusively on Vanity Teen.

The daily work of being an actor

VT: Some people try to make acting and performing arts an easy career. But what is your experience on that topic?

TPH: My experience has been that acting is one of those professions that you have to absolutely love in order to withstand the ups and downs of the industry.

You not only have to have thick skin, but you also have to be okay with the daily work of being an actor, and there is no audience there cheering you on for that daily work!

The grind of training, memorizing scripts for auditions, character work, hearing ‘no’ so many times, and going long stretches without massive recognition for that work can really wear you down if you don’t truly love the work of being an actor.

Walking the red carpet or working side-by-side with a megastar on a movie set is such a small part of being an actor. There is so much more that goes into it, and those other parts have to be fulfilling to you to have longevity in this profession.

VT: Among your acting credits, you voiced for Goro Miyazaki’s Gkids and Studio Ghibli’s Earwig and the Witch. How would you describe that opportunity?

TPH: Voicing Earwig in Earwig and The Witch was an amazing opportunity that I am so thankful for. I got the audition in 2020, at a time when I was missing so many bookings that I had coming up and during a time when the pandemic was at such a scary place.

I turned in the audition I recorded in my home studio and pretty much forgot about it. So, to get the call that I booked the voice of the titular character was really exciting! Earwig, in the English dub of the movie, uses a British accent, and I was so honored to get chosen to bring her to life. I actually went into the studio to record it, and that was an amazing experience and a lot of hard work!

In my opinion, voice acting is probably the most difficult in many ways because it is really repetitive, and many times you are having to act and react to something you don’t actually see or only see on a screen in front of you. I learned so much through that process, and I am very grateful for the experience. Plus, Kacey Musgraves played my mom in the film, so that was awesome. I am a huge fan of her and her music!

VT: We also know you love volunteering. Can you share a little bit more about it?

TPH: I do! I am a huge animal lover and very passionate about animal rescue. I volunteer at a local animal adoption agency that helps stray animals find homes. My favorite area to volunteer is in the cat room.

I help clean their cages, feed them, switch cats from cages to the big playroom they have, and help at adoption events. I have even fostered some animals, which is hard because I just want to keep them all!

I currently have two rescue dogs named Winston and Trudy and one really old rescue cat named Matilda. I even have a little group of feral cats I feed in my neighborhood, and I’ve named them all.

Needless to say, I am a big believer in ‘adopt, don’t shop!’

VT: Currently, you are promoting Hocus Pocus 2, a highly anticipated project in which you portray a younger version of the iconic Winifred Sanderson. What can we expect from this new Disney+ film?

TPH: Oh goodness! I can’t wait for everyone to see Hocus Pocus 2. I really think fans of the original movie are going to love the sequel.

I think there will be a whole new generation that is going to fall in love with the Sanderson Sisters. Hocus Pocus 2 is such a fun and thrilling movie that will make you laugh! It’s full of the same mischief and mayhem of the Sanderson Sisters that people found so iconic in the first movie, but with some new twists and fun surprises.

It’s a great Halloween movie with just the right mix of scary and funny. People will also like seeing some of the Sanderson Sisters’ back story and history. I am truly honored and excited to be a part of the franchise.

VT: To prepare for the film, did you watch the original Hocus Pocus?

TPH: I’ve always been a fan of the original Hocus Pocus, but I did watch it quite a bit while going through the audition and callback process. That was so important to get the character down and know her well enough to be able to play with different aspects of her during my callbacks with the director and producers.

Once I booked the role of Young Winifred Sanderson, I watched parts of the movie every single night before going to set the next day. It was important to me to do the character justice and make sure I stayed true to who she is and what Better Midler created. So I pretty much had the first Hocus Pocus memorized by the end of 2021. (Laughs).

TPH: Great question! Young Winifred is feisty, bold, and menacing at times. She has firm beliefs about things and isn’t afraid to tell people her opinion or show her true feelings. At the same time, she really loves her sisters and wants what is best for them. She is protective of them and is quick to make sure they stick together.

I think there are several similarities between Young Winifred and myself. We both are very loyal. Keeping your word and looking out for your family and close friends is so important to me. At the same time, we can be very feisty and bold. I’m not really scared to tell it like it is. So, that part of the character was not difficult for me at all. That can be a good thing and a bad thing at times, though, for Young Winnie and me!

Keep up with me

VT: Which women inspire you and why?

TPH: Oh wow! Where do I even start? I am very inspired by Serena and Venus Williams. They are both amazing athletes who have worked hard to get where they are in the tennis world. What they overcame and still rose to the top of their sport is very inspiring. I imagine there were times they just wanted to give up because it was “too hard,” or they thought it might never work out for them. I can identify with that some, and it’s inspiring to see them stick with it to become the very best there is at what they do. Their “never give up” attitude is definitely motivating to me.

I am also very inspired by Zendaya. She is a beautiful, successful actress who just seems so authentic, down to earth, and really kind to others. She isn’t afraid to use her platform to address injustice or other social issues, which I appreciate. That’s not always the easy thing to do.

Betty White is also inspiring to me. Not only in her long acting career but also in how she used her position and platform to help animals. She made sure she not only talked the talk but, she gave so much of her own money and time away to help various animal groups. I really want to be like that one day and use whatever influence I have to make sure people understand the importance of taking care of animals and helping rescue groups as best I can.

VT: Do you have a dream co-star?

TPH: Well, I just got to cross several of them off my list with Hocus Pocus 2! I would add Andrew Garfield to that list. Not only is he super cute, but he is a great actor and really funny.

I would also love to work with Sadie Sink. I am a huge Stranger Things fan, and she is so amazing in that show. I would love to learn from her, and we are Texas girls. So, I think we would have a lot of fun together!

TPH: Ballet! Being in the studio and at the barre is what brings me joy and helps ground me to get my mind off of acting for a while. My mind can just let go of all the other things swirling around me, and I can just be in the moment.

I also always try to do ‘normal teenager’ things as well including hanging out with my friends, going to football games, late-night outings for ice cream with my best friends, and all the things that feel like real life when acting life can often seem surreal and be stressful at times. Finally, taking breaks from social media is important for my mental health as well.

Social media does good things and lets us connect with others, but it is often just the highlight reel of people’s lives, and you can start to feel bad about your life really fast. I’m lucky that my family helps remind me of that often but taking an actual break from it all and just putting my phone down for a while goes a long way in making sure I protect my mental health.

VT: Where can we find you on social media?

TPH: Well, speaking of social media (laughs), I would love for people to join me and keep up with me that way! We can all promise to use it in a positive way that lifts each other!

For ages, women were objectified, hidden, or silenced by outdated stereotypes; but currently, we live in a world where everyone has a voice worthy of being heard. So, I love when young ladies like Taylor Paige Henderson speak their minds out and embrace all their facets, even those that may not look as pretty as others.

Besides, common expressions like feisty and bold might be associated with trouble; nonetheless, Taylor Paige Henderson proves we can relate those concepts with staying true to ourselves, defending our values, standing up for our loved ones, and accepting who we are. How cannot love her? Don’t you agree?

I hope you enjoy getting to know her better as much as I did. Also, we invite you to watch Hocus Pocus 2 and let us know what you think about this new chapter of that comedic Disney classic.