You might recognize Gjon Muharremaj, also known as Gjon’s Tears @gjon.s_tears for his breathtaking performance in the Eurovision Song Contest 2021 representing his country, Switzerland, with his soft and captivating voice singing Tout l’Univers. With a total of 432 points, he finished in third place, the best position that Switzerland has had in the contest since 1993.

We had the pleasure of having a talk with him for this exclusive interview in which Gjon talks about the meaning of his stage name, how he became interested in music, his journey with it, and what meant to him being able to represent his country in the international song competition Eurovision. He also talks about his career after Eurovision and the new album he’s working on, which might be released “sooner than expected” as he says.

Gjon shows his most human side in this interview, in which we get to know him better and his marvelous story. He says that his songs represent him, and I believe that Tout l’Univers is a window to his soul because I sensed his humbleness when doing this interview. This song is a caress, very fragile, and there is no doubt that it represents Gjon. He’s a beautiful person with an amazing soul and he has infinite talent.

He has proved his talent in Eurovision and I am sure the music he will release, hopefully really soon, will achieve the mission he set when he was a child when he sang that song to his grandfather, which was to touch everyone’s hearts and make us all cry. He’s grateful for all the support he’s getting now, and we are sure he will accomplish everything he sets his mind to!

VT: What’s your story with music? How did you get interested in it and what made you want to pursue a musical career?

A: I started music when I was really young. I think I was eight years old, and I started playing the piano because I felt something special with it. I was also fascinated by the symbolism of the greatest artists: Bach, Mozart, and Beethoven. We consider them as gods, and I really loved that. I was also fascinated by the discipline, that’s what made me fall in love with music. Besides the piano, my first time singing was when I sang my grandfather’s favorite song to him because he asked me to, which was Can’t Help Falling In Love by Elvis Presley.

VT: Your birth name is Gjon Muharremaj, so how did you come up with your stage name Gjon’s Tears and what does it mean?

A: When I sang my grandfather’s favorite song to him he was so touched by my voice and so emotional that he cried. Those tears became so strong for me because he had an education that taught him not to share his emotions, to keep them to himself. So when I saw my grandfather’s tears I was really happy in the way that I was feeling like a superhero but at the same time I didn’t really know what was happening, so I felt really powerful and I knew that that’s I wanted to do that in my life, to touch other people’s hearts and make them cry with my songs. Those tears became so symbolic that I wanted to keep them in my stage name, that’s why I’m Gjon’s Tears.

My grandfather always told me that I would be really famous but he would not be here to see me, and that’s why maybe I always have the impatience to go quickly all the time for him to see everything he told me I was going to be and to show him all my achievements and also his achievements because without him I wouldn’t be singing. I also think that the symbolism of tears is beautiful in general because you can cry of sadness, joy, anger, disappointment, or any other emotion, and I really love that symbolism.

VT: I believe that being able to perform at Eurovision must be thrilling. How did you react when you knew you were going to represent your country, Switzerland, in Eurovision Song Contest?

A: I was really really happy of course, but at the same time I was really scared because I had always wanted to do something good and I wanted to give my best and be sincere to myself at the same time, so that’s why I wanted to go to Eurovision with “Répondez-moi” [the song he was going to perform at Eurovision 2020] first, and then when I had to come back [to Eurovision 2021] I really wanted to come back with something that represented me again. I am really happy with both songs.

VT: You’ve participated in different talent shows such as Albania’s Got Talent, Die grössten Schweizer Talente and The Voice: La plus belle voix. What drove you to participate in these talent shows?

A: Actually, when my grandfather cried for the first time when he heard my song, he told me: “I need to show you to the people.” He then arrived the next year and he told me “I’m gonna bring you to a show” and I was like “but you have no connection with TV grandpa” so I thought he was joking, but he was not. Step by step, he called people and he reached out to the producer and asked her if it was possible to put me in that show and she accepted me, and it was just like one appearance. I sang an Albanian song in Albania because my grandfather is from there, and so I sang there. Then, Albania’s Got Talent saw me in that show and called me, and I finished in third place.

The French saw me at Albania’s show so they asked me to go to France, so I did, and I did the same in Switzerland. After all these shows I just wanted to stop and have normal studies like everyone, and I wanted to go back to normal life, that’s why I stopped. I also wanted to work on my music, because at that time I was imitating other artists and I wanted to find my way, my music, my universe. When I was eighteen I joined an academy, and during the last concert of the year my mother recorded me singing on stage with my band and she sent it to the producers of The Voice without telling me. They called me and asked me if I wanted to be part of The Voice. I did it, and I made it to the semi-finals! It was a lot of time, it was like a coincidence, and not always like “hey, I want to do every show”, it was more the occasion and I just said, “let’s go, let’s try” and I really liked that. It made me learn a lot about music, about the music industry and especially about TV, about how to work with cameras.

VT: Which is the best part of these contests and how do you get the most out of them?

VT: I am sure Eurovision has opened so many doors for you. What’s next for you? How do you plan your future career?

A: I’m going to release my album, so I’m working on it with my label from Paris. Eurovision was a huge step in my career, but now I need to prove again my worth. I’m just going to create my music that will look like me like I always do, and I hope people will like it!

VT: What does music mean to you?

A: I think that music is the way to express your feelings without using words, but more with melodies first. Of course, you use words but I think that if you don’t have words you can sing, but if you don’t have a melody you cannot sing, you can just like rap. I have the feeling that the melody is the way of expressing explicitly your emotions and your feelings and that’s what I love, it’s the way we communicate with our souls.

VT: To conclude, what would you say to those who look up to you and want to be successful in the music industry? Would you like to send a message to the world about anything else we haven’t mentioned?

A: The best message I can send to everyone is to always be yourself, for young or older people, no matter what age. People who want to work in the music industry, take care, be aware and informed about everything and be true to yourself, understand who you are and defend your identity whatever might happen, and stay yourself, that’s the most important thing. Defend your values.

Thank you to everyone who is supporting me, I’m so happy to have such crazy support from all around the world, so thank you for this and see you soon with some music! You never know, it could be sooner than expected! 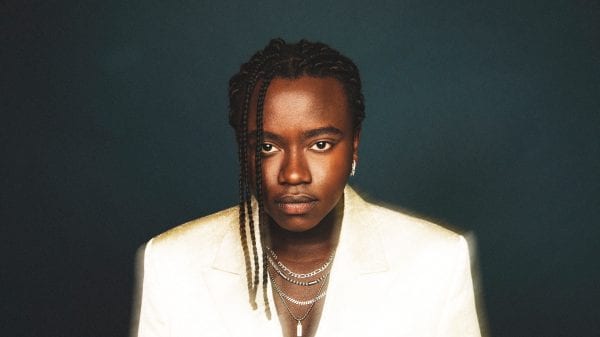 Sweden’s Eurovision Song Contest 2021 representative Tusse @tusseofc gave us the opportunity of chatting with him about his journey in the world’s biggest music...