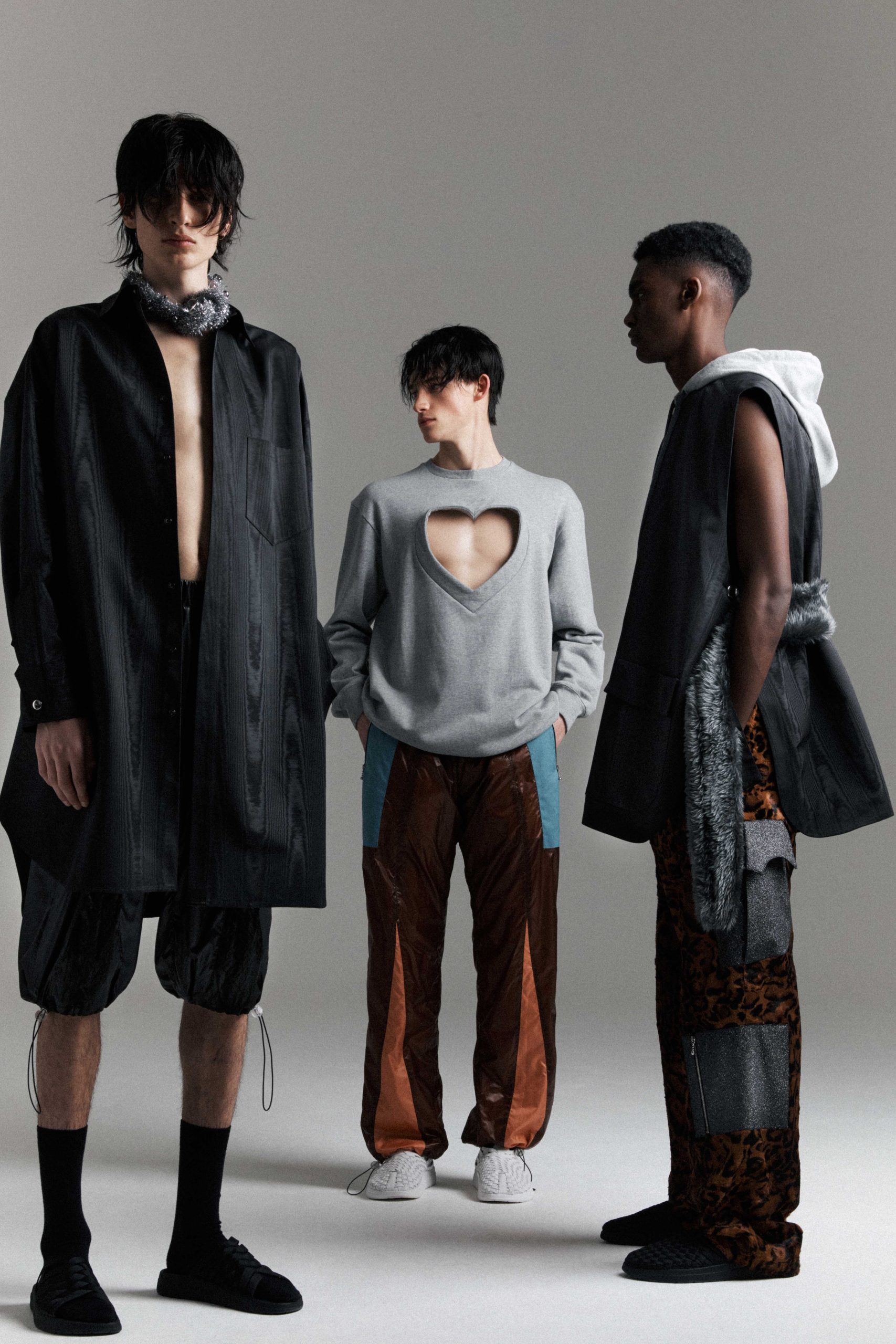 NICOMEDE. Episode. 2 draws on a typically original source of references that collide to create a look that is progressive, modern, youthful and optimistic.

London-based Nicomede Talavera assimilates boybands, historical dress and a continuation of 1950s couture, uniforms and sportswear as the foundation of this collection.

An evolution of NICOMEDE. signatures weave throughout the collection. Gingham is reimagined through a distorted and optical lens in black and white and red and pink, corduroy (first used in Nicomede Talavera’s CSM MA collection) comes in fawn brown and purple grape and the NICOMEDE. ‘Origin’ waistcoat and jacket are key silhouettes for the season.

The beauty of womenswear 1950s couture is recontextualised for 2020.

Outerwear has a focus on silhouette with coat shapes that are cocoon, rounded and quilted. An MA1 bomber is reimagined in black nylon gabardine with a voluminous back, dropped shoulder, inserted sleeve and arrow head welt pockets to create a key piece from the collection. The finishing touches of Episode. 2 also nods to the era; headscarves made from leather and satin, draped jersey scarves with utilitarian metal poppers and complimentary jewellery sets that include chokers, bracelets and brooches.

Knitwear is rich and textural with the NICOMEDE.SERENA GILI crew neck knit and oversized cardigan drawing inspiration from bygone historical dress and armour. Each individual piece is elaborately technical and brushed mohair yarns are knitted with bugle beads, screws and metal elements that are key signatures of Gili’s work.

Boybands are a stylistic and literal reference for the season and personify ‘Brotherhood’ which is the backbone of the NICOMEDE. label. Boybands over the decades have influenced not only music, but also style and fashion and freedom of expression. Today’s boybands and charismatic pin-ups represent a totality of everything past and present.

The NICOMEDE.NOT/APPLICABLE partnership sources authentic vintage tees from Los Angeles that pay homage to iconic boybands including NSYNC, Immature, Boys to Men, New Kids on The Block, Backstreet Boys and are reimagined with distorted gingham jersey. The extended length is a reference to the proportions of Nicomede’s CSM MA collection. Heart motifs reminiscent of fan mania are cut outs within youthful crewneck sweat shirts and hand-sewn creating crystal inlaid headscarves that enhance the character of the individual.

The hoodie, which has defined trends and the silhouette of the past decade is given a romanticised new guise. With details such as a historical shoulder and raised elbow detail, a rounded half-moon 1950s pocket, slashed tunic shapes, ruched drop shoulders and voluminous rounded back.

The jewelry is a progression of the NICOMEDE.EKATERINA PRONINA partnership. Former Central Saint Martins’ MA classmate Ekaterina Pronina has hand-crafted unique forms that fuse the hyper-modern with the traditional. Richly textured wool yarns have threads of tinsel and metallic, that embrace the natural stones and crystals create a rich palette that comes from the iconic 1968 film Barbarella.