Liv V: "I’m a jig saw puzzle that is a solid pastel color" 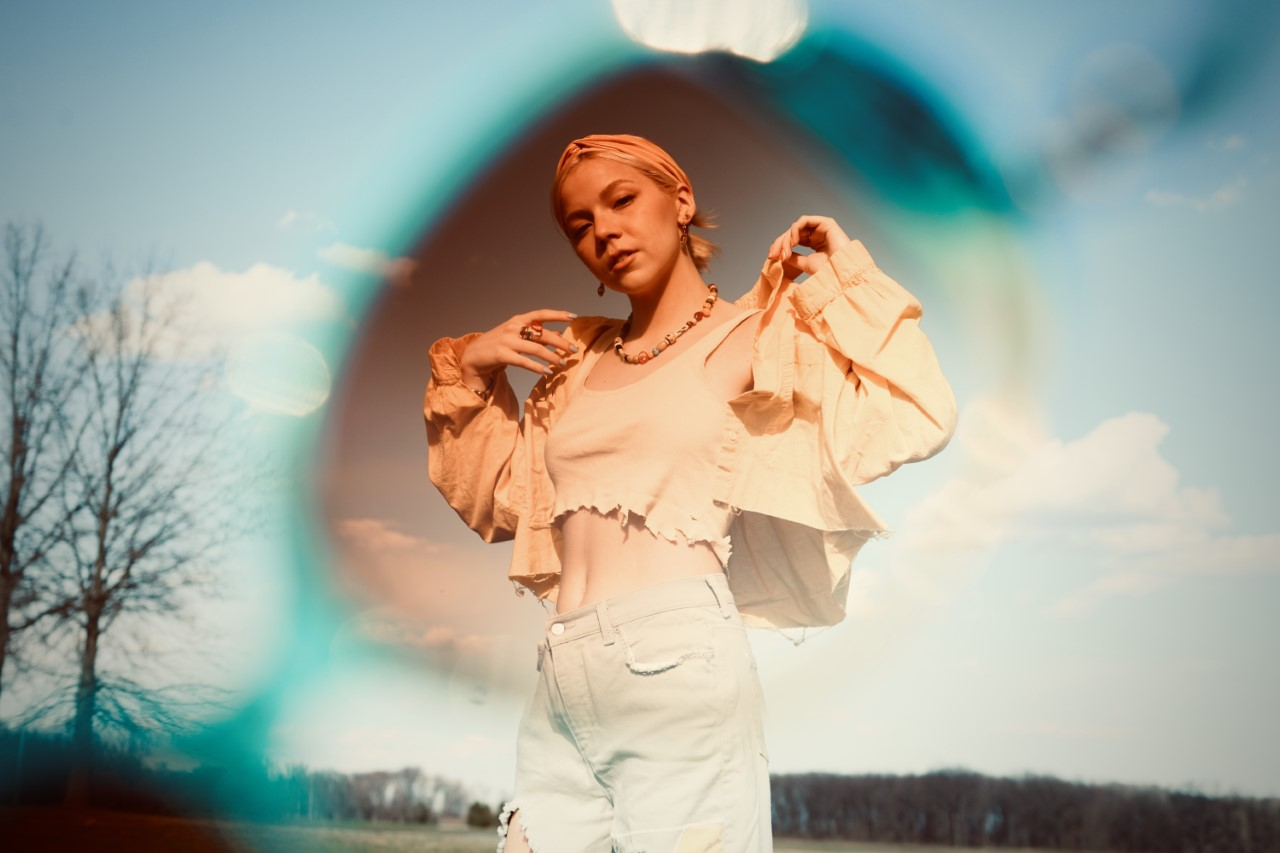 The talent of Liv V (@livbrodie3) seems to be obvious. She is an 18 years-old talented girl who has entered the Indie music industry stomping. Liv V is a singer, songwriter, producer, and pianist too. Her passion for music started when she was a child: at the age of 7 she started to write songs. Moreover, she realised that she loved singing when she started at the school.

Her first album was launched in 2018, and after this she has not stopped working hard for being more recognised: From collaborations with other singers to some streaming channels. In her Instagram account, where she has more than 46 thousand followers, you can appreciate her fashion style and her coloured hair, that make her more special and unique. Also, she demonstrates through her style that she has a strong personality and maturity for being just 18 years-old.

Liv V shows to the rest of the people that she has a dream in the music industry, and it is not easy to get. But with her effort and her persistence she is making it a reality and, at present, she is demonstrating that a star was born inside of her, and now it is starting to shine.

–How does becoming famous as young as you are feel like?

I don’t feel like I am famous and nor am seeking it.  It is actually just something that happens because you are trying to promote music, but there are artists and creators and there are entertainers.  I believe true entertainers enjoy the fame.  I think producers, singer, songwriters really want to just create and have people love their art/craft.

“I think producers, singer, songwriters really want to just create and have people love their art/craft”

–Can you explain how the process of becoming a singer has been and how did you decide to go for it?

I have been singing since I have been little and remember loving it at 4 years old.  Hannah Montana and The Voice, American Idol were all big shows when I was young so that made me feel like I could do that and be on the stage one day. I wrote and illustrated books at 7/8/9 and raised money for kids in my town to help with eye care.  Since then I turned my writing of books to writing of music and scores/compositions, and then production.

I had written three songs that won this contest for Black History Month three years in a row with different songs and it made me feel like I could make a difference with my voice and that people believed in my ability.

–How did it change your life? What is different now from before?

Well, before I did go to school and have sports friends that I associated with.  I choose to do online school for high school to be able to put the time I needed into music and the sport I had wanted to play.  Once I realized this condition I have was working strongly against me I knew music was my obvious choice to put all my energy into.  I also realized that playing that sport didn’t bring me joy anymore only stress and frustration in so many ways and music was what healed me so why not just devote my energy to that anyways.  It got to a point of why would I want to continue to play this sport in college if I can make music.

–What do you do to get inspired for writing songs?

I don’t need to do anything, but be present in the world and my surroundings.  If you watch people and situations with families and children you can get inspired so easily from one instance.  Sometimes the funniest of moments triggers a fun song that no one really gets, but it can be catchy and super cool.  One song my brother has coming my mom told him his legs looked skinny so I belted it out and put an effect on it for a beat I was making him and it ended up being so cool and funny.

–Which singers have been your inspiration in your childhood and now in your singer career?

When I was young, Adele was my queen.  She still to me is one of the most talented singer/songwriters out there with Jon Bellion because of his production style and ideas.  I have listened to Nina Simone, Billie Holiday, Kings of Leon, Harry Styles, Pat Benetar, and many many more new and older.   Amy Winehouse of course is who everyone compares me to though and she’s been an inspiration in her earlier untouched music.  I still feel for her and Mac Miller as well as many others that have played a role in my development and style.

–How would you describe yourself as an artist?

I’m just a girl.  I’m a girl that has done all of high school online and avoided many things that didn’t interest me.  I enjoy my me time watching funny tiktoks and comedians on youtube.  I love creating new production styles, concepts, ideas, trying new things, and singing obviously.  I love to create my own look and am not afraid to wear what I like.  Hair I have had everything I think besides shaving my head, I’ll save that for my midlife crisis if I make it there. I think I am observant most of all and extremely guarded.

My emotions and feelings come out in song and my vocals.  I don’t let a ton out in every day life. I hold a lot in internally.  Not that that is a good thing, but you start to learn that having a thought or opinion opposite others seems to just spark confrontation many times so it’s easier to write and sing about the feeling instead.

So to sum me up I’d say I’m a jig saw puzzle that is a solid pastel color.  I like to think I’m humble and grateful for so much and simple things mean the most.  Getting to really know me will take many more time than they have patience for which allows me to weed out the users and abusers.

–Do you think that the music industry can be difficult to get into for a woman?

Is that a joke?  It’s an understatement!  Everyone wants something for your fame and fortune…No matter how much talent someone has it’s all about the fans sharing your music and streaming, subscribing, and commenting.  So much is based on algorithms now that if you have anything that does well it’s slowed up and taken down if you are an indie artist.

Theres so many flags on social medias now so that you have to be with a label to be successful otherwise I feel people continue to throw up road. Blocks.  I still haven’t signed and haven’t found one actual genuine person or deal in the business yet.  I will just keep creating and continue to work as I always have and pray that something changes.  It’s tiring seeing young people overdose so young because they are overworked and underpaid and ran around by 25 people making all their money.  I don’t want that life.

–What can you comment us early about your next song ‘One Step at a Time’?

One Step at a Time is a unique opportunity that presented itself over quarantine and to be honest if we weren’t on lockdown I may have turned it down and then my brother wouldn’t have all the songs coming that he does and I would never have know what it’s like to have a Samba out.  So some producers that loved my voice reached out with a millions compliments to me as an artist and were the most genuine yet that I have spoken with in the world, besides my personal sound engineer @djwizdetroit, I haven’t met someone that didn’t want money for them to promote, be a manager, get 3 videos and pitch to a label.  So the guys were talented in their own ways and I thought this could be neat since they just want to actually invest time and efforts as well as their resources into my music to bring my voice to Brazil and Belgium/Europe.  So they sent production I wrote and created, sang and sent to them.  They they made a samba and a edm version of the song.

Now are either totally my normal production or style, no, but their genuine want to work the way I do and to help us both I liked.  I’ve struggled to be able to find a promotional outlet that wasn’t a waste.  I’ve tried everything and it’s all lies and garbage.  Robots aren’t going to your concerts and they make it so hard to get you out there unless someone has claim on you and will make money back.  So we shall see.  I have always been working on me, but I’m to a point I have a lot of my style out that if I try a samba and edm now that people can go find my Spotify, Apple Music, pandora, tidal, youtube and find me as a producer and artist that knows who she is.

–What advice would you give to someone that also wants to start a music career?

Advice to give…I mean work and drive to create you can’t give to someone.  You have to persevere and find your true sense of self and confidence.  You have to be able to take criticism and be strong in what you believe in and who you are.  You have to be able to back your ability of your brand and product you put out and you can’t quit because many don’t always like the art piece.  There will be opinions coming in left and right and what I have found is all the advice every artist wants to give actually flies over my head because if I do what all of them wanted it wouldn’t be my art anymore and you have to get to a place that you feel ok with that.

If you are an entertainer that’s a different view. I think advice as an entertainer can be taken in because your job is to entertain.  To create an art piece that’s original though, you cannot let everyone have a say in that.  I’m tired of so many taking on an artist they love then they sign a record deal and so many others are involved and they lose the originality that everyone loved them for.

How many artists second album is a flop or falls short?  It’s because the industry legit sucks the life and creativity out of them… if you want an artist to create allow them space to do so.  Allow them life experiences that drive those visions.  Embrace them as humans and support them as an artist.  Too many opinions, too much judgement holds an artist back from some of their best creations.