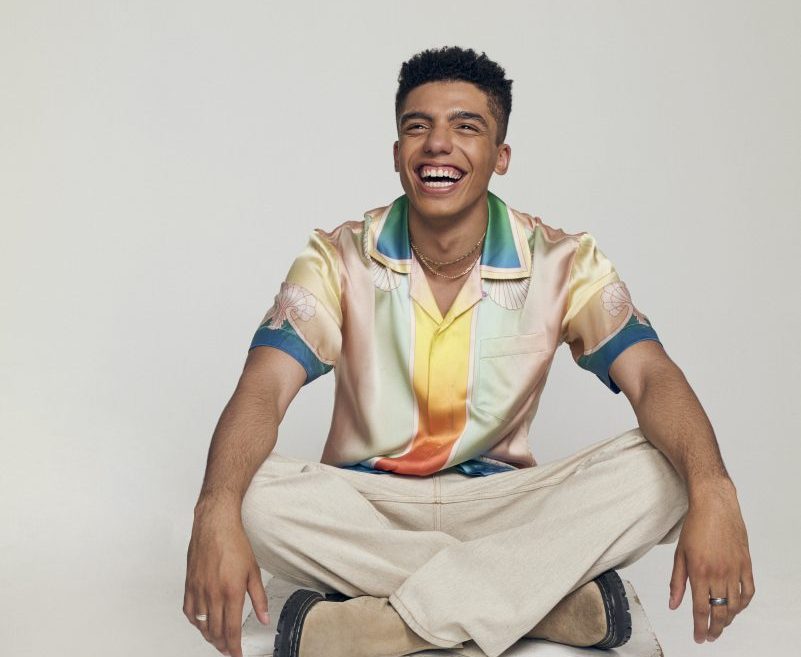 Jay Lycurgo has a smile that could melt the coldest heart, but his kind heart is even more superpowerful as he radiates sympathy and positivity from the inside out.

He gained international recognition since he brought to life the iconic Tim Drake in DC’s Titans, and we are glad to know that we will see more of this character in Titan’s upcoming fourth season in November. However, this time, we are honestly excited because his latest project, the greatly expected The Bastard Son & The Devil Himself, is out now.

So, in this conversation with the disarming Jay Lycurgo, we spoke about his life and new projects. Of course, we definitely talked about a boy named Nathan Byrne in the Netflix adaptation of Sally Green’s The Bastard Son & The Devil Himself.

Find out more only here on Vanity Teen.

So right and pretty incredible

JV: What motivated you to pursue a career in acting?

JL: I just really enjoyed it as a kid, but I did not know I wanted to do it professionally. So, you know, there was a school play, they were doing the Wizard of Oz, and I wanted to go for the Scarecrow, and I ended up getting the role.

I always remember that being my first memory of me being on a stage, and I was thinking: “This is really fun.”

It began there, but I wanted to become a professional football player until I was 16. So, when I started to watch live plays and all those people. And I saw characters come alive on the stage. Then, I realized how much fun they were having and how powerful the scene was, the emotions began to come for me, and all that affected me. It was so amazing.

Then, I began to go to after-school clubs, and I had this drama academy I went to when I was 17. So, acting was always there in the background.

I remember that I did a monologue for my teacher. It was The Long Road by Shelagh Stephenson, so my teacher told me I should go to a drama school, and I did not know what that was (laughs). But I did my research, and then, it kind of just happened. I mean, here I am. (Laughs).

JV: I am amazed that one of your first roles in the theater was playing Stanley in A Streetcar Named Desire. So, how is it to you realize how some classic plays are well-received among new generations?

JL: A Streetcar Named Desire was really awesome to do! I actually did it in drama school. So, it was honestly fun because it was a really human character, a very aggressive and emotional one.

For new generations like me is like showing these men are really vulnerable and emotional. And that was nice to see back then. I mean, reading that play and seeing Marlon Brando doing it blew my mind because he is really vulnerable. But for me, as part of the new generation, I thank God they could see men can be vulnerable because if I was an actor back then, with that idea of the toxic man, I would not survive. (Laughs). I am too sensitive. (Laughs). Now man knows best those things.

JV: You are a young actor, and there is so much more to come in your career, but what does it mean to you to be known as the first person to portray Tim Drake in a DC’s live adaptation?

JL: Tim Drake was a huge milestone for me in my career. I did not know Tim Drake was going to be Tim Drake until my manager told me. I just knew I was auditioning for DC’s Titans.

Also, Tim Drake is an awesome character. Indeed, Greg Walker, the executive producer and basically the showrunner, decided to make Tim Drake mix-raced. I mean, that was so awesome because there is a huge community of black and mix-raced kids who do not get to see a lot of superheroes of color.

So, I was able to take the torch and play Tim. That was an immense honor.
I have seen a lot of stories of fans that had never had a voice but now are not scared to wear a Robin suit, and that is because people are taking more chances on people of color to play these superheroes. And that is so right and pretty incredible.

You know that Tim is a really awesome character.

JV: Also, you were part of the worldwide hit The Batman. How was that experience?

JL: The Batman was really awesome! At the time, I had been acting for a year. I remember getting that role, and it was like any other tape. I got a dummy script and just went for it, not knowing what I was going to play. Once I got it, I did not believe it because I am a huge fan of Batman.

It was a really awesome experience, and working with Matt Reeves left me in awe because he is such a perfectionist. So, watching a very talented director in his element so early in my career was just amazing!

I had a great time doing that job. It kind of helped me to be where I am in my career now.

JV: Now you are part of a new exciting project based on Half Bad. So far, what can you say about this new Netflix series?

JL: It is called The Bastard Son & The Devil Himself, and it is a dark, humorous, romantic, fun, intense, human and bold fantasy show about a boy named Nathan Byrne, the son of the most feared witch on the planet.

It is great for anyone who loves blood, sweat, and tears. (Laughs). It is very human and as fun, as you get, all the fun and the excitement of a fantasy show.
So, if you want to love, you want to be scared or emotional, and if you want to have a thrill, then this is the perfect show.

JV: How do you deal with the pressure that implies bringing to life Nathan, a character many readers know and love?

JL: There is never any pressure when bringing a character to life. You know, because you want to make a character as real and multidimensional as possible. You look at how you relate to the character and not to the pressure.

To me, it was about how I related to Nathan. He is very isolated, so you take the things you might have experienced at that one point in your life. For Nathan, it was looking back to high school and seeing how you wanted to work out who you really were at that time.

So, I think about when I was 16, but you don’t have the anxiety by the time you’re on set, so you have to live it.

I was really excited to play Nathan. It was a challenge for me because I am just a quite smiley, happy guy, a laid-back person at times, but there are more intense bits of me. So, I might be sensitive and emotional, and that is what Nathan is going through.

It was a challenge I was really excited to take on.

A superhero power to have

JV: What can you share with us about your upcoming plans?

JL: Well,  The Bastard Son & The Devil Himself is out now. Later, I have DC’s Titans season four in November.

So, you can see Nathan Byrne on Netflix now, and then, you will have a really cool, fun, naughty boy in Tim Drake since Titans is going to be coming on HBO MAX. You can look for that.

JV: How do you take care of your mind and body?

JL: The way I take care of my mind and body is simple. About my body, I like to work out. I always find that working out puts me in a better mood and starts my day off right.

And about my mind, I guess I just do things that I want to do. It is quite simple. I try not to stress myself out, as I am a huge over-thinker, but I am just fortunate to have really good people in my life that keep me on track, and I can talk to them.

I think I am in a good mental space because I have some amazing friends and family around me. But when I am not feeling good, I just like to talk about it.

I always encourage people that if they are feeling down, they should articulate and communicate it because that really helps me.

I also often have a really lovely cup of coffee (laughs) or go for a walk. Those kinds of stuff honestly help me. I am just keeping busy. And that is what I am doing right now. I am always keeping busy.

JV: Which words do you have for those who look for superheroes or magic in everyday life?

JL: Do it! Have that ambition for optimism. You know, we may not have superpowers, we may not have flames or electricity, or things coming out of our hands. We can’t necessarily fly or teleport, but we have human powers like taking care of ourselves, taking care of the people around us, loving all the people around us, and being honest. I think those are superhero powers themselves.
Just try to be a positive person, and have goals. Those are also superhero powers.
I think that finding what you are passionate about and striving towards something is just magic. It might sound cheesy, but that is a superhero power to have.

JL: I want to say thank you so much for having me. Also, The Bastard Son & The Devil Himself is out on Netflix. We had the most incredible people working on this show, inspiring writers, and a great cast. So, guys, if you are looking for a magnificent fantasy show, this one has incredible cliffhangers and an amazing story, then this is the show for you.

The Bastard Son & The Devil Himself is a great show to binge for this Halloween.

As Jay Lycurgo said, we can enjoy The Bastard Son & The Devil Himself since the show is available on Netflix everywhere. Nonetheless, from this interview, I would like us to recall that every one of us can be a hero. Our superpowers do not have to be extra sensorial aspects that defy the laws of physics but the human virtues that make us move forward, push ourselves, share love, and go after our dreams.

Magic exists and is something simpler and more beautiful than we think.

In this article:Jay Lycurgo, Nathan Byrne, The Bastard Son