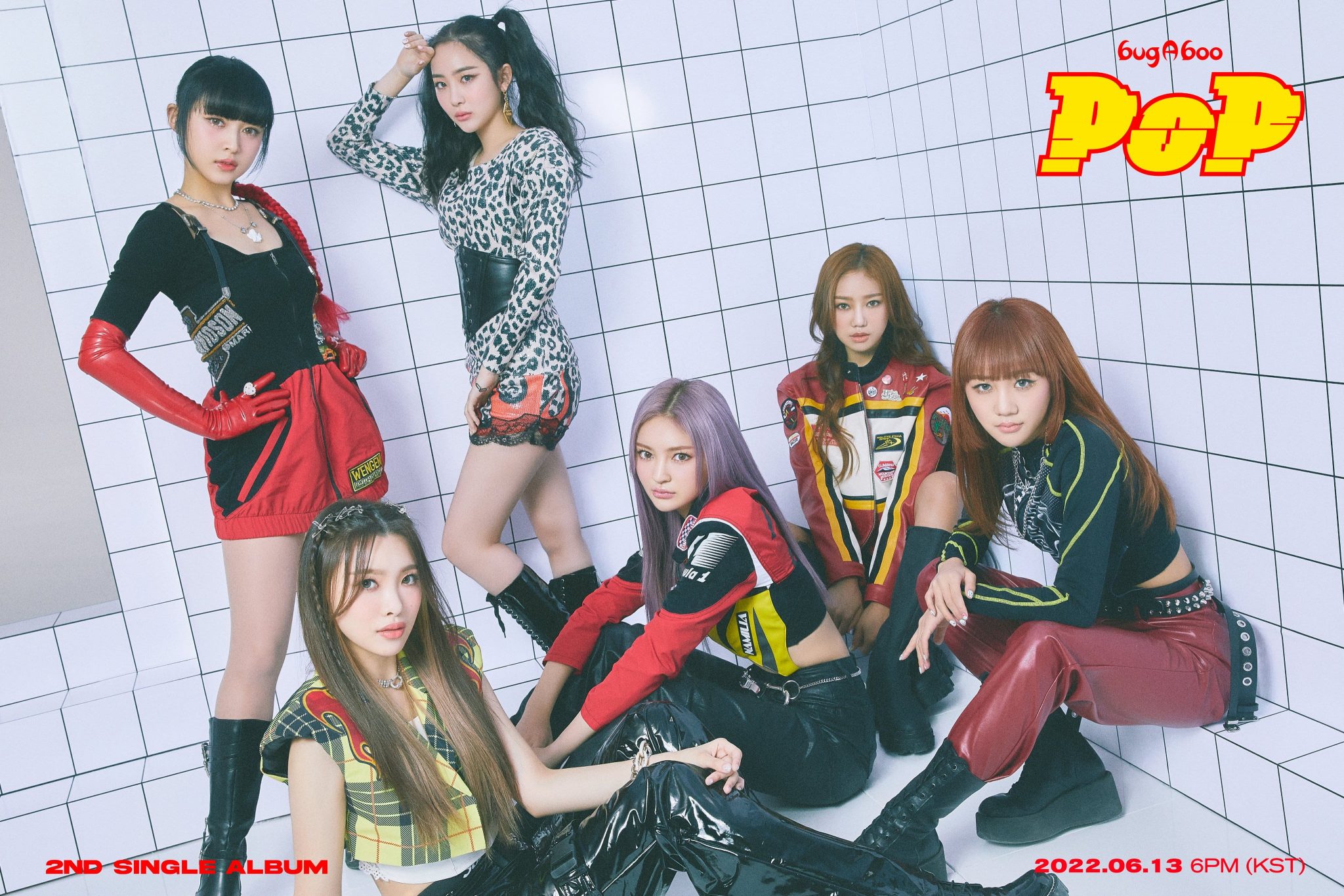 After debuting in October of 2021 with their first self-titled single album, the six members of the bubbly girl group bugAboo made their already original name an unforgettably quirky K-pop staple. Almost immediately, their debut single became a track that worked its way into listeners’ minds for unforeseen periods of time – aided by a music video through a cartoonish, ghostly lens with fiery choreography included throughout.

After the promising release of bugAboo (@bugaboo_offcl), it became impossible to not anticipate their eventual return, and as expected, they succeeded in bringing the heat (just in time for summer). Now, eight months after their debut, bugAboo revives their optimistic sound on their second single album POP, a defining title that perfectly describes its expressive sound and confident posture.

Serving as the group’s first overpoweringly sweet treat, the single “POP” sprinkles in a few slight familiarities to show a more assertive stance that many witnessed on the brassy track “bugAboo.” The uncommon chorus arrangement within “POP” also manages to feel like a fresh take on current repetitive inclinations – ramping up to a prominent bridge that actually benefits the song as opposed to feeling like a misplaced moment often debated in pop music.

One thing that’s certain is that the vast world of K-pop just received an explosive addition to a heavy-hitting 2022 roster, courtesy of the endearing rookie group. With POP officially out now, Vanity Teen was eager to catch up with bugAboo about all things music, and more!

After your truly thrilling 2021 debut with the self-titled track “bugAboo” people all over the world were so eager to offer their support! How has that relationship manifested in 2022?

CYAN: bugAboo and fans are each other’s supporting trees, therefore we maintain a very close relationship! Even though we couldn’t meet our fans due to the global pandemic, we know we trust and lean on each other so I’m looking forward to the day we actually meet. RAINBOO is my biggest motivation and strongest energy!

RAINIE: We have prepared a very cool comeback with an addictive title track. We’re ready to show a whole new side of us, so I hope you enjoy our ‘POP’ promotions.

You’ve attained millions of views for that debut track too, which felt like a really welcoming and colorful picture that offered listeners some prominent visuals to accommodate the vibe. If you had to pick one way for people to discover the song via song or music video what would you each choose?

CHO YEON: I think our music video and the song itself are very popping and happy, just as stated in the title ‘POP.’ I wish everyone to feel our powerful energy by enjoying stage performances and music video together!

Your new single album POP compliments that sense of youthful and energetic music that fans have come to expect for a follow-up – so how would you personally say this release compliments the reputation you’ve created with bugAboo?

EUN CHAE: We tried to upgrade our energetic side with this album, so I hope to share our unique energy with more people.

YOONA: For our debut, I think we were more nervous and had a rather stiff image of ‘We’re bugAboo! Hello!’. Since it’s our second album, we’re trying to relax more and really express our hidden energy.

The track “POP” uses its very first few beats to hook listeners and continues to pay off with some smart contrasting elements, to the dance beat incorporated in the chorus! Were there any elements of the song that you’d say took time to fine-tune, due to its ambition?

ZIN: I think the most challenging part was to find a groovy rhythm on such a hard-hitting beat. Also, I studied a lot about my own voice tone because I thought it doesn’t stick very well with ‘POP.’

YOONA: It was quite difficult to record my part, “everything will pop, so thrilling” because this part’s beat is very fast. So I had to work more on pronunciation and rhythm.

We then transition into “Easy Move” which is a really nice choice for a B-side since there’s a solid groove to it that might feel unfamiliar to bugAboo! In what way would you say this song feels like it fits the bugAboo style you’re aiming to create?

RAINIE: Honestly, we just wanted to try different concepts and send various messages through music. Our b-side track is very good, so hopefully, listeners can pay attention to it as well.

CHO YEON: I wanted to deliver the message in ‘Easy Move’ to RAINBOO because the message of ‘don’t be stuck in one thing, let’s go find new answers’ was very memorable. I thought that we must include this song in the album.

I also read that your music video involved choreography from Harimu of Street Dance Girls Fighter, so how intimidating was that process – and how much did you learn from that process as dancers?

EUN CHAE: We learned a lot about positive energy and powerful dancing from her. She is just full of energy and good vibes, so I think our synergy worked really well together.

CYAN: We’ve been admiring the talents of Amazon crew members, so it was amazing to learn dance from Harimu! She taught us a lot about how to control our body power, so I hope you focus on that while watching our music video and performances.

You’re officially two comebacks into your career, but still under a year since debuting, which suggests there’s so much more room to grow as artists! What currently excites you most about the prospect of being in bugAboo long-term?

ZIN: I think bugAboo shines the most when our individual talents are gathered together as one. We’re a group of amazing talents, so I hope you keep your eyes on us for a long time!

CHO YEON: We’ve been building great teamwork by practicing together for a long time. We’re also excited to show more of our natural charms!

If you had to offer fans insight on the most fulfilling prospect of the POP era, what would you like to share with people about your new work?

CYAN: I’m really excited to perform in front of our fans this time! I always thought it’d be great to see our fans when we perform, and we finally can enjoy our music together!

EUNCHAE: I’m really proud of our choreography because it is the first idol choreography from one of the hottest dancers in Korea now. We want to share our great energy through this choreography, especially with the hard-hitting power in the chorus. Also, if you look at our music video, there are a lot of scenes filmed on a robot arm. Using a robot arm is a delicate and precise way of filming, and I heard that no other girl group has tried filming in this method. We’re very proud to be the first girl group to try this filming method, so I hope you enjoy our title track ‘POP’ and its music video!

YOONA: For ‘POP’ choreography, 1MILLION’s Harimu created the choreography and gave us lessons. During our practice, we mentioned that we enjoy watching 1MILLION videos, and she suggested shooting a video together! We visited 1MILLION studio for that shoot, and it was a great experience because I’ve always wanted to visit the place. 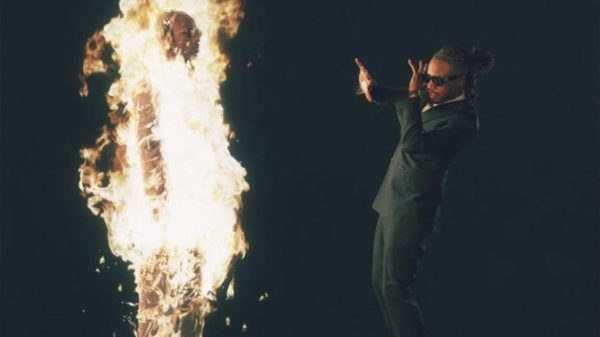 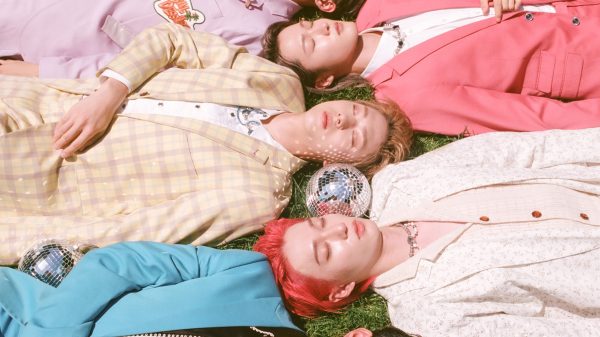 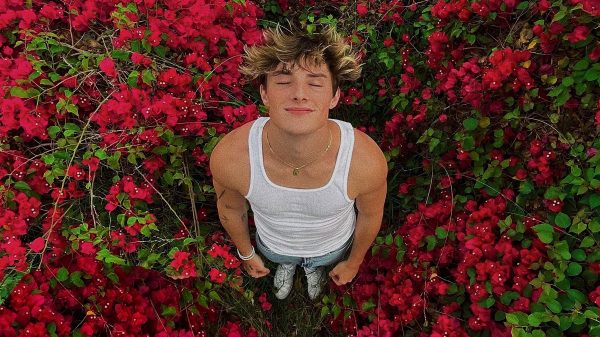 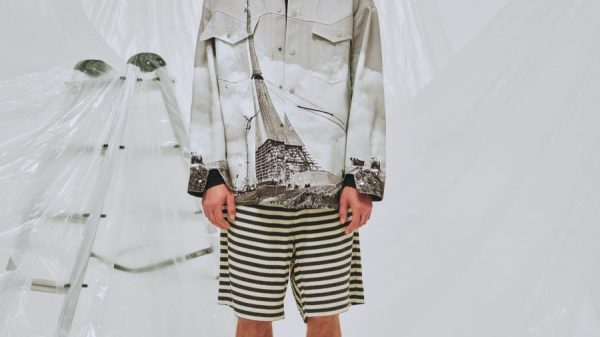