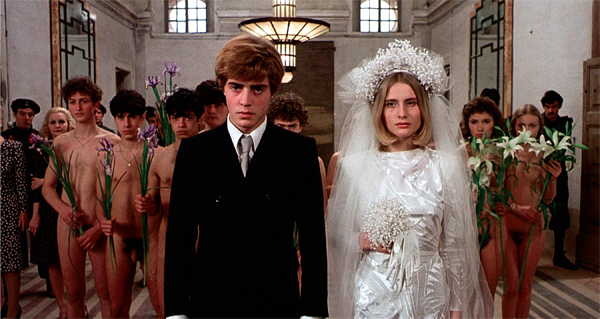 Plots full of injustices and profound unhappiness, disturbing cruelty against human beings, and an incredible artistic eye to mix these elements together in different authorial feature films. In other words, why Lars von Trier is the Pier Paolo Pasolini of the second Millennium.

Pier Paolo Pasolini is mainly known in Italy for his incredible creative writing skills and his political views, the latter brought him to be assassinated by the mafia back in the mid-seventies. Pasolini died some years before von Trier started making feature films.

As a filmmaker, the Italian artist has written and directed more than twenty features and documentaries. His last movie, Salò, or the 120 Days of Sodom (1975), is still considered one of the scariest films of all time. There are no ghosts or disfigured monsters, but just humanity in all its crude evilness.
It portrays fascism as an unhealthy and corrupted way of thinking by showing four wealthy men kidnapping, raping, and torturing many victims for over two hours of screen time. It is a feature film inspired by Dante’s Divine Comedy, which leads us to the first connection with von Trier: the ending of his last masterpiece, The House that Jack Built (2018), is heavily inspired by Dante’s journey across hell, purgatory and heaven. The Danish film director got influenced when it came to showcase the grittiness of humanity and its arrogance towards the world itself.

Both directors have this atypical quality of painting the brutality and evilness of humanity, making movies that are both disturbing and yet incredibly charming.
Pasolini and von Trier’s filmographies show various courageous attempts in analysing the deepest fantasies and fears of our brains, dividing the public between the people who boos at them during a film festival’s premiere, and those who admire them for the unusual, unique and experimental point of view they’ve been bringing to transnational cinema for decades.
Of course, being sort-of comfortable in showing coprophilia and sexual violence is not the only valid reason for which we could consider von Trier the new Pasolini. There are many other similarities between the two artists that make this comparison even more valid.

In particular, the representation of women as martyrs: let us take in consideration the female characters of Pasolini’s Theorem (1968), and von Trier’s Depression Trilogy – Antichrist (2009), Melancholia (2011) and Nymphomaniac (2013). The four films portray different women agonizing over different struggles, whether it is heartbreak, mental illnesses, or even the end of the world.

They could be seen as puppets in the hands of sadistic puppeteers. There’s no hope for these women, destined to be used, manipulated and experience an unhappy and frustrating life.

Both Pasolini and von Trier have always been outcasts, which may explain their obsession with sadness: the first was gay in a historical time where inclusiveness was lacking, the second has always been the quirky kid of European Cinema, dealing with depression and other controversies surrounding his personal life. They’ve been using art as a form of expression, creating characters and plots that are realistic and extravagant at the same time.
They have a fascination for everyday people who get corrupted by society and engage in behaviours that would commonly be seen as no-sense, but that are put in an environment where they can be justified for their actions: whether it’s a gang of people faking to be retarded (Lars von Trier, Idiots, 1998) or a young man with a weird fascination for the same pigs that are going to eat him alive (Pier Paolo Pasolini, Porcile, 1969), these two film directors challenge the audience in engaging with plots and characters that are not simply unusual, but incredibly controversial.

Lars von Trier is one of the few living directors who can initiate dialogues on themes that otherwise would be hidden from the cinematic world, exactly like Pasolini did during his life.

They are not scared of showcasing scenes that are “too much”, neither they care about the criticism they always get for their tricky art pieces.

In this article:Lars Von Trier, Pasolini