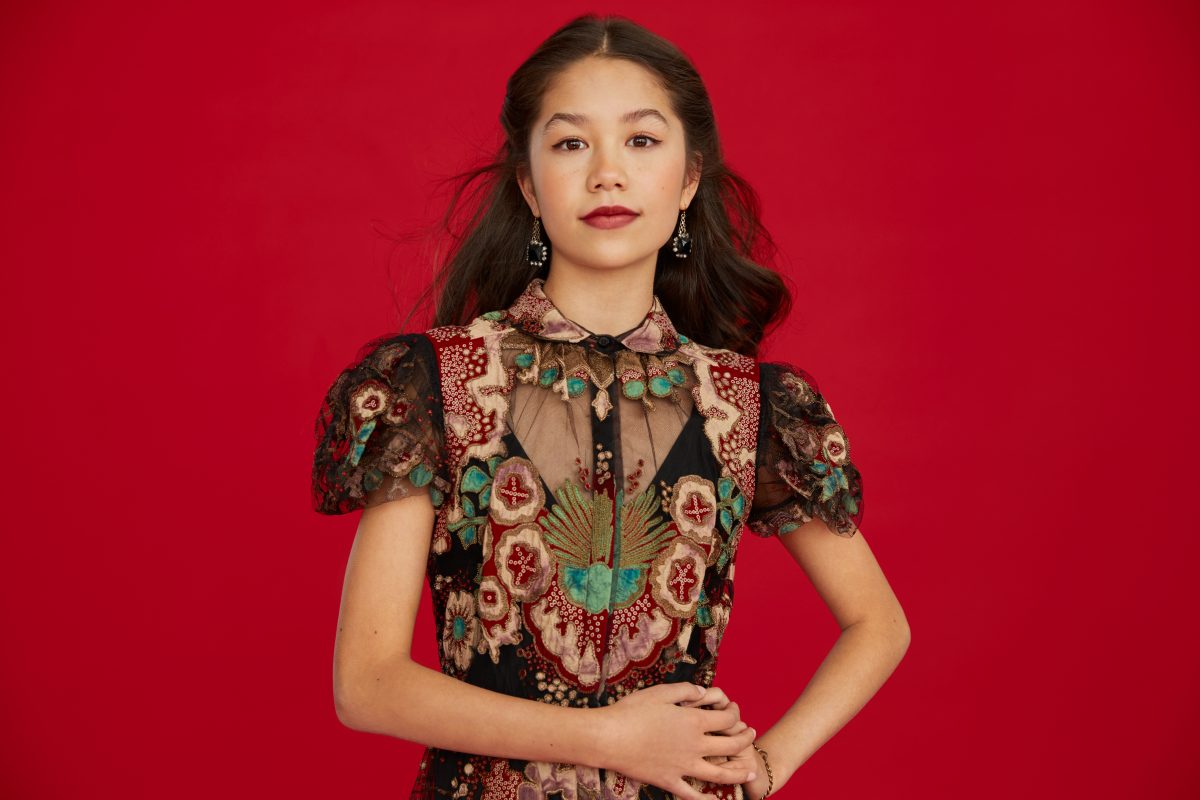 Trinity Jo-Li Bliss is a young actress who portrays Tuk in the worldwide hit superlative epic movie Avatar: The Way of Water. She comes from a multicultural family and is here to remind us to be kind to this world.

The type of kindness she talks about starts from within, recognizing who you are and celebrating your roots. In many ways, she reflects that attitude in her acting and music. So, we gladly invite you to enjoy this conversation we had with her to know better this joyful artist, her new album, and all the new Avatar films.

Coming from a European-and-Chinese-American family

JV: How did you find out you wanted to be an artist?

TB: Although my parents, both in life sciences, naturally hoped I would thrive in the STEM area, I often found myself making my own music on piano or guitar and singing out my feelings, even before having any lessons.

I have loved playing my music to friends and family as far back as I can remember! When I was 5, I auditioned for a local musical-theatre camp during summer break. My mom figured out how to get me in, even though I was technically too young. I was able to get a singing part for Beauty and the Beast! I really wanted to be Chip but got cast as a maid and a fork.

I loved the experience so much and continued participating in similar camps, later playing Young Nala in Lion King and the title role in Matilda, finally begging for acting lessons.

Of course, I also loved music a lot and, at the same time, started studying instruments. The rest is history!

JV: How do you manage to balance your career and continuing formal education?

TB: I will keep learning, in school or outside school. I can bring what I learn about the world around me into my music, acting, and who I am! There are cram periods, and I have to prioritize, but I always seem to make it through and have been blessed with great teachers that help me balance it all and learn everything I can!

JV: What do you cherish the most about coming from a European-and-Chinese-American family?

TB: What I cherish most, coming from a European-and-Chinese-American family, is how both western and eastern cultures come together. I get to enjoy food, wisdom, language, festivities, history, and stories from both cultures.

It’s so cool that every little cell in me has DNA from both sides of the globe! I’m so delighted to contribute to the biodiversity of the earth. (Laughs).

Be kind to this world

JV: The previous question leads to this one. Since Avatar: The Way of Water is a film that promotes family and diversity, how do you consider your family values helped you to develop Tuk as a character?

I am the youngest of the Bliss Family. I am younger than my brother by ten years. My mom is from China, and my dad is English.

In these ways, Tuk and my family are alike. And Tuk and I both have a little bit of FOMO (fear of missing out) syndrome! We just want to be included!

JV: Working with James Cameron sounds like a dream come true. How was that experience?

TB: It’s been a dream come true to get to work with Jim! He is such a great role model to all of us. I was a big fan already after watching his record-breaking Mariana Trench Dive! He inspires me to stay true to myself, be an eternal learner, and be kind to this world: our planet! Jim’s so nurturing and encouraging. He always takes the time to help us transfer ourselves into Pandora!

JV: How about the rest of the cast of Avatar: The Way of Water? Were you somewhat intimidated by that stars-studded group of artists? How did they make you feel?

TB: The actors from the original cast are all masters of the craft! They’re also so down-to-earth, humble, graceful, and amazing people!

For example, Sigourney is an absolute legend! She is my Auntie Gigi’s favorite movie star and my Dad’s celebrity crush (laughs!). From the beginning, she took me under her wing and made me feel like her little sister! Many of her scenes are with us, the younger cast, and she’d hang out with us and make us feel like she’s our big sister!

And Zoe is as beautiful and brave as Neytiri. She often invited us to hang out with her in her trailer, face time with her boys, and chat about stuff. When she held my hand, I became Tuk.

JV: Let us talk about your music. What would you like to tell us about California Sun?

TB: “California Sun” has a special place in my heart; it’s a love letter to a place I call home because I grew up in California, so I am a California girl!

We were deep into the pandemic when I wrote this song. So much was going on in this world outside my window. Although, I was trapped inside the house most of the time.

My grandparents were visiting us from China; they are the kindest people you’ll know.

I remember when I started to hear the news and stories about Asian people being attacked, and there became a thing called “Anti-Asian hate.”  My grandparents started worrying about going out and hanging our red lantern outside our door at the spring festival. I put my conflicted feelings and hope into my music, and one song that came out of it is “California Sun”! It is a song about hope and love. I hope you will all feel the hope and love of the California sun when you listen to it!

JV: What can you share about your debut album and upcoming plans?

TB: Songwriting’s my way of journaling my life and making sense of what’s going on around me and in me. I’m super duper excited for my debut album: Confessions of a Pre-Teen, to release on January 20th! This album has a collection of 10 songs selected from the songs of preteen me. I am ready to share with the world my pre-teen life! It is so scary yet exciting!

On the acting side, I’m excited about an upcoming series called Princess Power, where I play Rita Raspberry, the princess of the Raspberry Fruitdom. It’s about girl power and teamwork!

I’m also super excited about an upcoming project titled: Glisten and the Merry Mission! My favorite time of year is Christmas, and it’s a Christmas film! I Can’t wait to share more!
Of course, very excited about Avatar 3. December 2024!

JV: Which is your message for all those who might feel inspired by your work and attitude toward life?

TB: Follow your heart and your dreams! A little work every day! It will happen! Don’t let others tell you what you can or can’t do because you can do anything!

TB: I am a Potterhead! I’ve read each of the books about a hundred times! I really wanted to be Gryffindor, but I’m actually Ravenclaw. Although I cried when I first found out, I’m proud to represent my house! (Laughs).

Trinity Jo-Li Bliss celebrates diversity because she understands there is no other way to be kind to this world than to embrace our cultures and differences. At a young age, she became part of film history since she is now a family member of the magnificent James Cameron’s Avatar saga.

Her debut album expresses experiences that helped shape who she is today, and there is more Avatar in the future, so you can keep on posted by following her on social media @misstrinitybliss.

Let us remember to follow our dreams and be kind to this world.

In this article:Avatar, Trinity Bliss