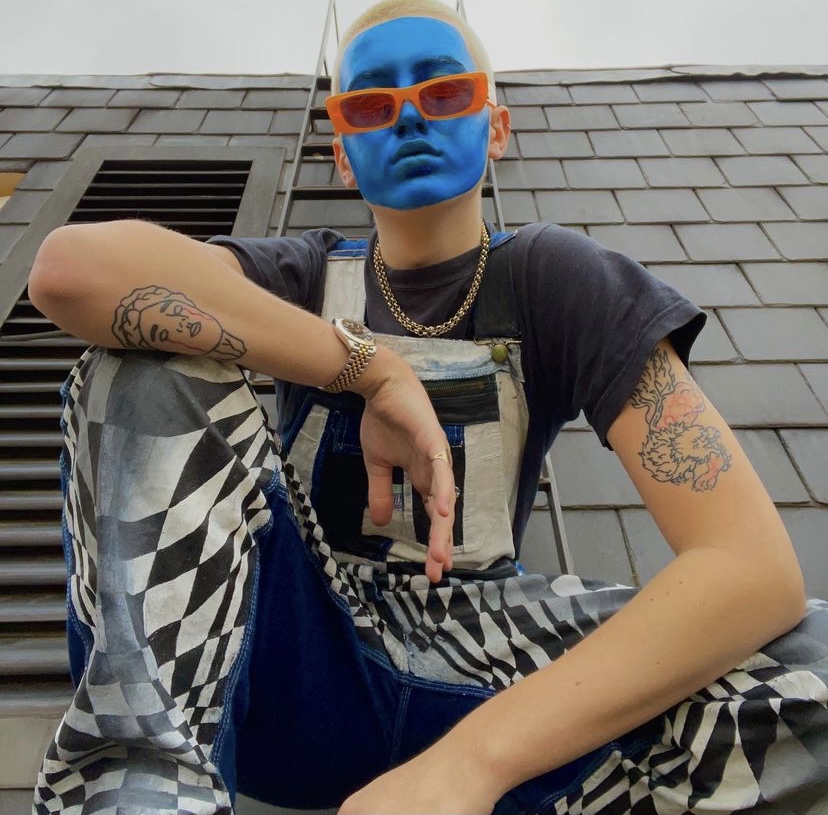 Sam Macer is a British artist whose transition into fashion has been well-received due to his optical painting, self-made fabrics, religious references, and bold performances.

In this conversation for Vanity Teen, we talked about his references, the use of fire in his exhibitions, how art could help us cope with life, and what is that so-called strange religious dichotomy in his head.

We invite you to keep reading to know more about this artist who is not afraid of fire or criticism.

That transition into fashion

VT: How did you get involved with digital editing and design?

SM: From a young age and up until roughly three years ago, I worked exclusively within the realms of fine art, predominately drawing and painting.

I always knew I wanted to make that transition into fashion; however, that always seemed to be such an unattainable task because I viewed it as a skill and craft that I couldn’t learn rather than the artistic expression I now appreciate be.

For the past four years (and still standing), I have grown an intense obsession with the Op Artists of the early 20th century, and in parallel with a recent discovery of Dutch fashion designer Iris van Herpen, I saw that both were clearly informed by similar sources, and the only different thing was their process. At this point, it seemed feasible that I too could use the influences that had been informing my art, but through the medium of fashion.

VT: Do you introduce yourself as an artist? Or do you consider people, somehow, find it hard to understand some can use art, designing, or craftsmanship as a way of living?

SM: It’s definitely not the first thing I say when I meet someone; but, inevitably, it comes into the equation as a conversation progresses, and it’s always interesting because it’s obvious if someone is asking questions to subtly say “what the f*** are you doing” as opposed to the ones who are genuinely interested.

There are three camps of people when it comes to this: the people involved in the industry so obviously they can understand it as a way of living because it’s their reality, the people who are able to appreciate it from a distance as a form of art, and the last (and most definitely worst) are the people that see what we do as futile and a waste of our and others time.

However, the argument I would adopt with such people is to take all of the creativity out of the equation; the fashion industry is a multi-billion dollar industry that millions of people rely on for their livelihood in both the western and eastern world; so, yes, it is a way of living, and in my humble the best way.

VT: Who would you say have been your biggest inspirations and why?

SM: Developing further on what I previously mentioned, the Op Artists of the early 20th century were hugely influential due to both the aesthetics and, not to be underrated, the process they also went through to create their works.

The most influential would be Victor Vasarely, Bridget Riley, and Josef Albers. I became obsessed with their drawings and plans they made before they finally embarked on the painting because it offered an insight into the process behind the seemingly perfect paintings that we would presume were made using technology if they weren’t made in the early 20th century.

There were several fashion moments that I saw the influences of the artists’ work over fashion designers’ work that gave me the confidence that I too could use the same research sources. The first three I remember were as previously mentioned: the discovery of Iris van Herpen, Louis Vuitton’s Spring/Summer 2013 show under Marc Jacobs, and Jean Paul Gaultier’s direct use of Vasarely’s paintings in his collections across the 90s using the shapes of the painting to emphasize the contours of the female form.

This strange religious dichotomy in my head

VT: What can you tell us about some religious glimpses we can appreciate in your work?

SM: Being raised in an atheist household but always having attended relatively strict Christian schools where church attendance was obligatory, I have always had this strange religious dichotomy in my head.

From it not even being in existence at home to going to school where it was shoved down my throat and forced upon me, I have always had this perception of religion as something oppressive and preachy with a major savior complex; whereas, the church portrays itself as an accepting and open place.

As a result of this, the religious glimpses within my work come from a very critical point of view and don’t shed the best light on Christianity.

VT: Let us talk about Self Immolation; from the whole garment to the full concept, it has been one of your most celebrated pieces. What can you share with us about it?

SM: Thank you! I like to heavily research before I even start to think about the making of the garment; so, I gathered many sources that were great as isolated research sources, but when I tried to begin the process of translating these ideas into garments, they were far too weighted.

So, after almost a month of research, I had to go back to the drawing board, keeping the same skeleton of the main concept but attacking it from a different perspective.

The concept of crucifixion was already in my primary research, and I wanted to add another element to the project that could offer a contrast to the exclusively Christian research, so I looked into Buddhism and wanted to see how they explore the same concepts through different processes. Having been focusing on crucifixion, I wanted to know about Buddhist’s methods of martyrdom, and that is when I discovered the act of self-immolation undertaken by Buddhist monks.

VT: At any point, did you or someone else ask you to think again if you wanted to include fire in the performance? How was the preparation for the presentation of Self Immolation?

SM: At the time, I was in the process of completing my foundation at Central Saint Martins and found some heavy resistance from some members of staff because they believed it to be far too dangerous; and they were pretty sure that something would go wrong. That was not entirely unjustified because I did set myself on fire and burn myself multiple times throughout the experimentation process.

The nature of the skirt did heighten the risk because the only way to put it on and off is over the head because, as it is made from welded steel, it has no bend; so it was not possible for the model to get into the skirt feet first.

Many people tried to convince me to shoot it on a mannequin to eliminate the risk of a person potentially being burned, but I knew that it would have nowhere near the same impact. Despite all the convincing, if I want to do something, it will be done. So, all this “advice” fell upon deaf ears.

However, I did complete an extensive risk assessment prior to shooting, and there were fire safety measures implemented, including fire extinguishers and the underskirt being made of flame retardant fabric that underwent thorough experimentation.

VT: What is it like for you the process of designing fabrics and making custom pieces?

SM: I don’t like fabric or material choice to dictate the direction of my project; instead, I prefer to gather a large amount of research and choose my materials, having been informed by the research process.

Making custom pieces is liberating because there aren’t the same constraints of wearability and function that exist within ready-to-wear, and so this doesn’t have to influence my design process, allowing a more direct relationship between research and design.

VT: Would you say arts and designing have helped to cope with your thoughts, anxiety, or feelings?

SM: When I started painting my optical paintings, I could enter a zone where I didn’t think about anything apart from what I am painting, so I soon discovered that this was a perfect form of meditation because I found traditional methods of meditation to not work for me because I was not able to eliminate external thoughts.

SM: I’m a big believer in faking it till you make it and forcing yourself to fully express your authentic self even if you feel grossly uncomfortable; eventually, you will convince yourself to not care what people think.

There is nothing more liberating than deciding not to allow other people’s thoughts of you to affect your own thoughts of yourself because, at the end of the day, who gives a s***; it’s your life and not theirs.

Sam Macer is defying fashion boundaries with his artistic proposal, and we cannot love it more. Let us stay tuned with his projects to know what is coming next.

On Vanity Teen, we are glad to see new artists like him using their creations as a form of liberation and a way to express themselves. Sam Macer has invited us to find our truth and speak out through art; thus, how about following his example and safely devoted ourselves to what makes us happy despite what others think?

In this article:exclusive, religious, Sam Macer