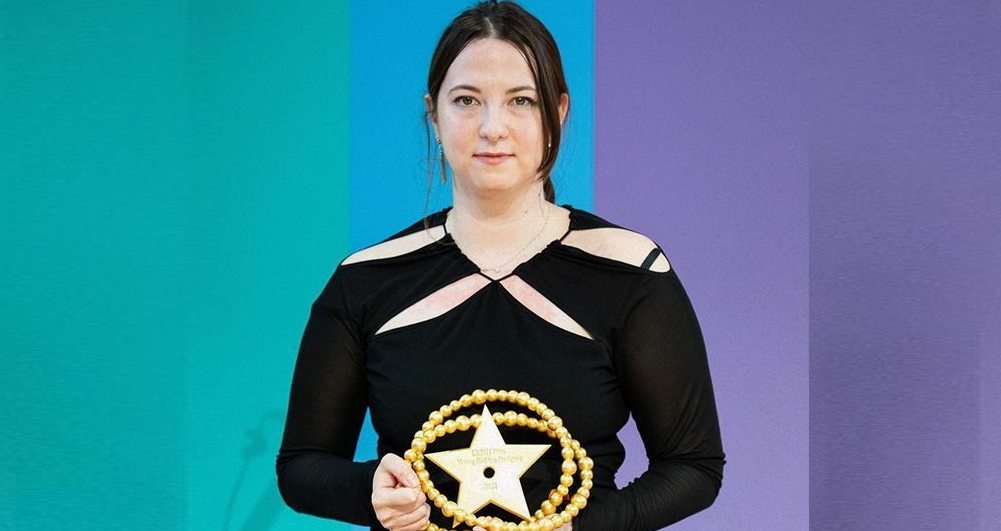 In an intimate ceremony at the Louis Vuitton Foundation in Paris, Nensi Dojaka, 27-year-old designer of Albanian origin, was awarded with the LVMH Prize for Young Fashion Designers.

The award that the giant luxury brand holding company gives every year is highly coveted, and Nensi Dojaka rose above around 1,900 applicants from 110 countries to win the 2021 edition. The talents recieve 300,000 euros and one year of expert advice from the company.

“I suppose that the jury liked the fact that I have a very specific and at the same time commercial point of view”, commented the designer after being awarded.

Originally from Albania and based in London. In 2017  Nensi Dojaka launched her eponymous label, a high-end women’s prêt-à-porter brand, while she was still completing her Bachelor’s degree at the London College of Fashion, motivated only by her passion for fashion. Then, she continued her training at Central Saint Martins, and she was convinced that she wanted to keep up with her project after her first successes. In fact, in 2019 when she had just finished her studies, getting a master’s degree in womenswear, Nensi Dojaka started selling her creations on the Ssense platform through a capsule collection.

She broke into the London fashion scene last year with the help of Fashion East, a non-profit new-talent support organization that gives designers the opportunity to stage a runway show at London Fashion Week. Since then, Dojaka has become known for her ’90s-inspired unstructured silhouettes, where layers of sheer fabric and silk come together with asymmetric shapes to result in ultra-feminine pieces, delicate but very bold at the same time.

For the last few months, Dojaka has started to sell her pieces in emblematic places such as Selfridges, My Theresa, Voo store or Luisa Vía Roma, and one of her dresses has reached the top 10 of most sought after garments, according to the Lyst Index’s hottest products of 2021, alongside designs from brands like Bottega Veneta, Prada and Hermès.

She’ll also be a part of luxury retailer MatchesFashion’s Innovators Programme, an annual initiative that offers each class year-long support including mentorship, preferential business terms and a £2.2 million investment in marketing support.

Since its founding in 2014, the LVMH Prize has promised to provide emerging talent from around the world funding and insider connections to boost their careers. Some of the previous editions were won by names well known today such as Jacquemus, Hood by Air, Marine Serre or Grace Wales Bonner

Dojaka was selected by a jury composed by the house’s star designers and industry leaders including Stella McCartney, Jonathan Anderson of Loewe, Marc Jacobs, Kim Jones of Fendi,  Virgil Abloh of Louis Vuitton, and Maria Grazia Chiuri of Dior, as well as the group’s most prominent executives: Sidney Toledano, Delphine Arnault and Jean Paul Claverie.

In this article:exclusive, LVMH, Nensi Dojaka