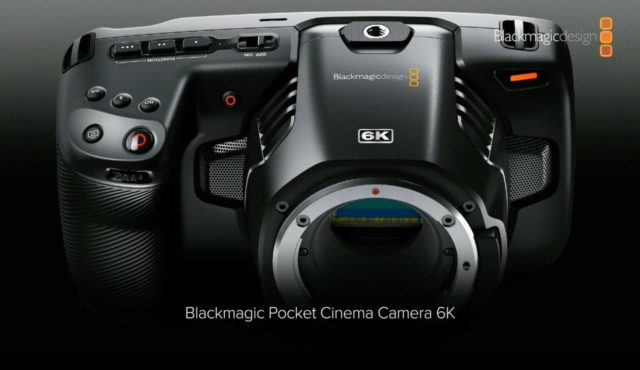 Blackmagic Design launched last year a 4K video camera, which was great, but a few days ago was announced the Pocket Cinema Camera 6K. Don’t let this cinematography camera’s retro design fool you, it shoots in Super 35 format with a resolution of 6144 x 3456.

The Super 35 shots will allow much better low-light results and control over depth of the field. Even though the 4K Micro 4/3 lens mount was a huge success, the “BMPCC” 6K uses Canon’s EF lens mount and Blackmagic is claiming 13 stops of dynamic range with dual native ISO (International Organization of Standardization) of 400, but the company assures that it can get up to 3200 with clean images and a maximum of 25,600 for very dark scenes, meaning that the quality of the images is phenomenal.

The 6K camera has a 5’’ touch screen to visualize the content and operate the camera’s settings. It has mic input and earphone output 3.5mm jacks, full-size HDMI port with a 10-bit exit, mini XLR connectivity, USB-C for external storage, DC power and external LP-EP6 batteries with safety system, which lasts for about 45 minutes. The camera also counts with a system of 4 integrated microphones for stereo audio recording.

The camera counts with C-Fast 2.0, SD and UHS-II storage entries and it is stated that 1TB can storage up to 260 minutes of 6K footage at 24 fps and 120 minutes at 60 fps, among the same lines as a movie. There is the Black Magic Raw option, which provides better control in color adjustment as well as more friendly editing formats such as ApleProRes of 10-bits. It can also take pictures of 21 MP (Mega Pixels) in RAW and DNG.

The Pocket Cinema Camera 6K is priced at $2,495, almost twice as much as the 4K model, but includes the DaVinci Resolve Studio software.