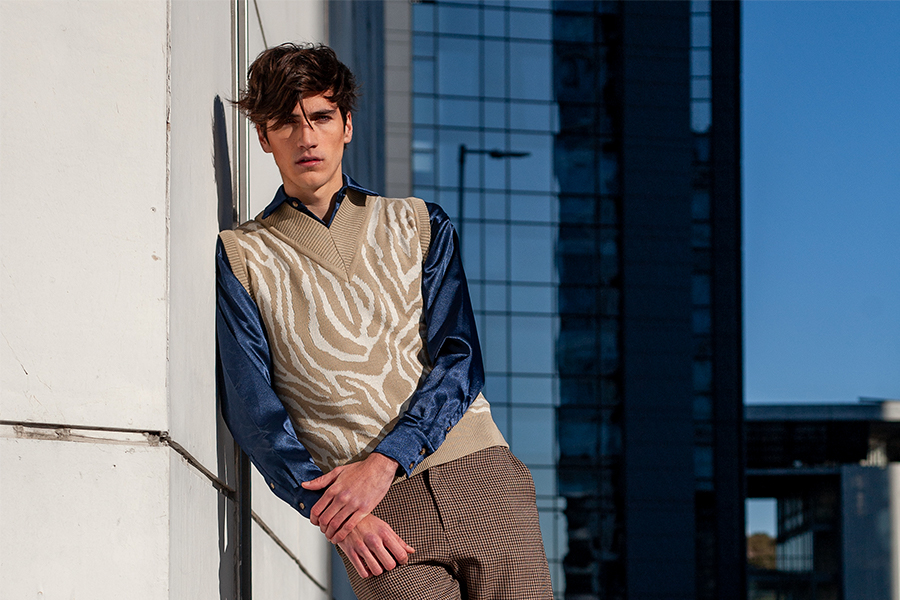 Inspired by art, the city, and youth, the photographer tells us the story that this fashion editorial portraits: “He is a guy who moves freely around his city, he is a lover of museums, and probably comes from a family of plastic artists, that is why in his style he brings elements that represent avant-garde and sophistication but from a youthful and fun side. The city is his muse, he pays attention to the little details that’s why he enjoys taking his own walks around the city, with his own rules, it is his playground, it is his inspiration space.”

The initial idea the team had was to work with a wardrobe that mixed textures, fabrics, patterns, and colors that played an important role with natural light, as seen in the works of art in modern museums. Accompanied by an architecture typical of a big city, with urban and geometric spaces.

The satin shirts are a representation of the reflection of the skyscraper glass, the animal print communicates the fury of the city, the quadrille replicates the lines that form the city as it spreads out, and finally, as a whole, they create outfits inspired by a boy who he is an observer of details and appropriates them.

“The joy of dressing is an art.”

Gozz used a Canon 5D Classic with a 50mm 8.1 lens. The editorial was photographed in Puerto Madero, Buenos Aires, Argentina, one of the newer areas of the city. It is next to the river and has a totally different mood, naval but modern and geometric.

As a team, we like to gather classic elements and mix them with others that have a touch more strength or rebellion, experiment with that, and have fun in the process. In this case, the pieces that were used for the shoot have a lot of personality and that together work very well just like the work team we had.

“The truth is that from the beginning I felt very confident and comfortable seeing the team I was going to work with. The outfits they chose were excellent and that gave me a lot of ease, that’s why I feel that the photos were made much easier,” says the model Jose Emiliani.

In this article:Gozz, Jose Emiliani